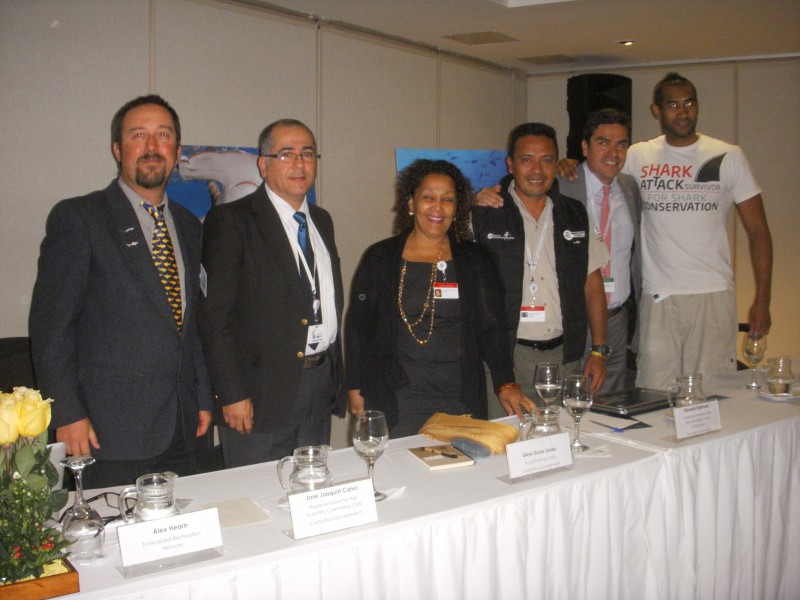 Quito, Ecuador (Nov. 5, 2014) – The Marin-based nonprofit Turtle Island Restoration Network (SeaTurtles.Org) is in Quito, Ecuador this week to lobby for protections of sharks in the Pacific and around the world at the United Nations Environment Program (UNEP) Convention on the Conservation of Migratory Species of Wild Animals (CMS).

The meeting is being heralded as a historic opportunity for shark conservation with a record number of shark and ray species being proposed for listing under the Appendices of the treaty. Sharks, rays and sawfish make up 21 of the 32 proposals for new listings on the CMS Appendices. [1]

“We are here to provide expert scientific opinion and policy recommendations to protect and restore hammerhead and silky shark populations that migrate in and out of the sovereign waters of many nations,” said Steiner of Turtle Island, which has official international observer status at the CMS and the UN.

Ecuador and Costa Rica proposed the listing of two species of sharks, the scalloped hammerhead shark and the great hammerhead sharks, and invited Hearn to present his scientific research on sharks at a special event yesterday (No. 4, 2014).

“Sharks do not recognize political borders, so we are pleased to see that Ecuador is taking a leadership role in promoting their protection at the Convention,” said Hearn who has worked in the region for more than a decade studying the migratory movements of sharks and sea turtles at in the Pacific including Galapagos National Park in Ecuador and Cocos Island National Park in Costa Rica.

Analysis this year by the IUCN Shark Specialist Group shows that an estimated quarter of the world’s 1,000 plus shark and ray species are threatened. International cooperation as well as continued research is needed to safeguard sharks. The Convention is set to make history on Friday should it list all of the 21 shark species in its appendices.