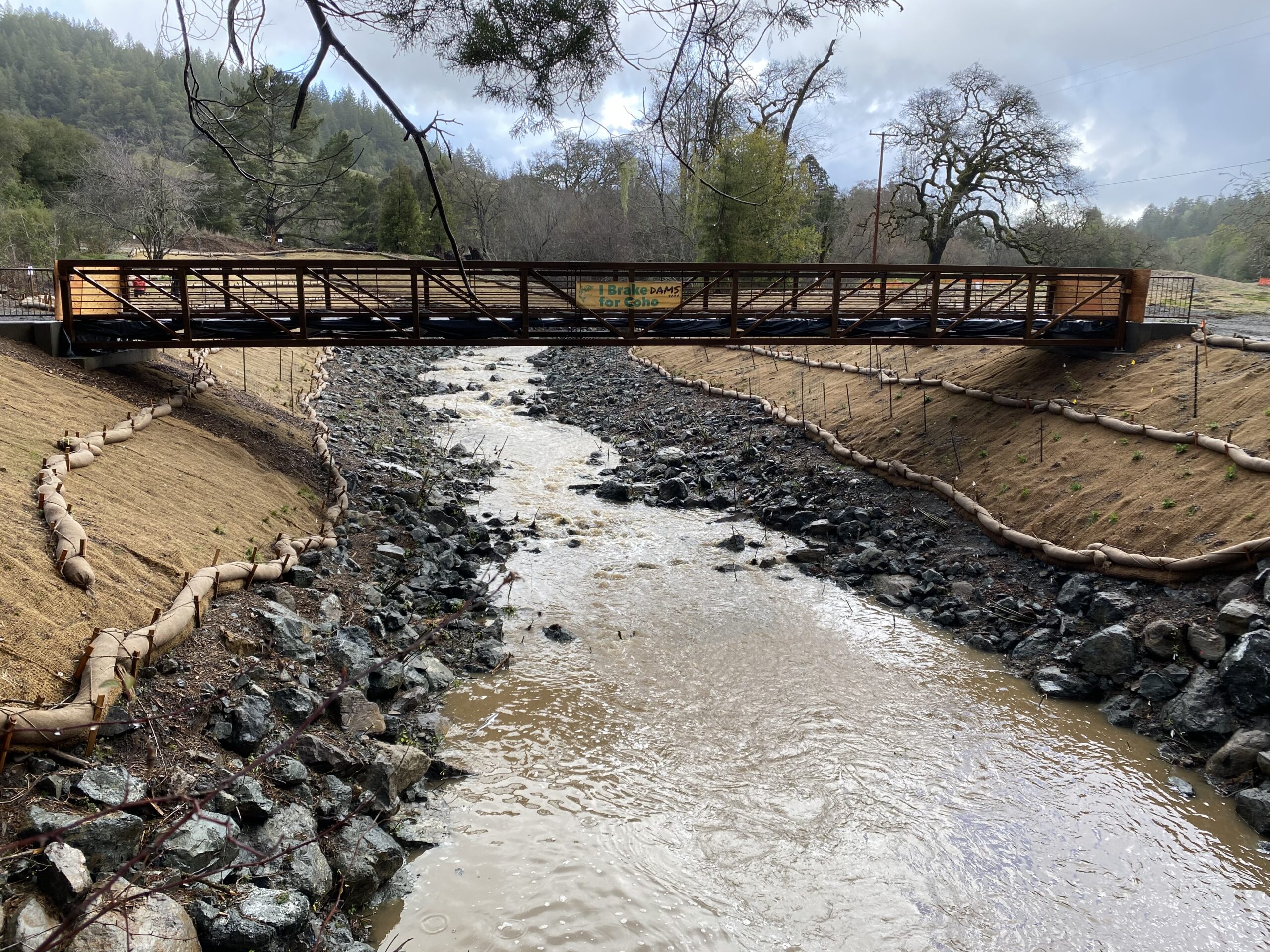 Ribbon-cutting ceremony to be held on Wednesday, March 17 at 12:30pm PST

SAN GERONIMO — A 100-foot pedestrian bridge that will connect the Marin County community with trails on the former San Geronimo Golf Course will open to the public on Thursday, allowing visitors to enjoy views from the new bridge and make a giant loop around the 157-acre property.

The bridge was installed by the Salmon Protection And Watershed Network (SPAWN) as part of their long-awaited “Roy’s Riffles” restoration project to remove the highest priority fish passage barrier in Central California. The old wooden bridge was supported by rotting logs and needed to be replaced for safety reasons.

SPAWN crew and representatives from landowners The Trust for Public Land will host a ribbon-cutting ceremony to open the bridge on Wednesday, March 17 at 12:30pm PST and will be available for interviews.

The bridge sits directly over San Geronimo Creek, one of the most important watersheds left for endangered coho salmon, where SPAWN removed a 100 year-old dam to allow endangered coho salmon and threatened steelhead trout to freely migrate. The nearly $2 million dollar project was funded by the California Department of Fish & Wildlife and SPAWN members. The dam’s removal was the highest priority fish barrier identified in the federal NOAA Fisheries Service Recovery Plan for the species.

“We are delighted to have this phase of the restoration complete to create an amazing opportunity for visitors to view Roy’s Riffles, which allow salmon and steelhead to migrate up and downstream unhindered by the old dam,” said Preston Brown, SPAWN’s Director of Watershed Conservation and Project Manager. “The area around the bridge remains an active irrigated restoration and revegetation site, so we ask visitors to remain behind the orange fencing and keep their dogs on leash so our native plants can flourish and the riparian habitat can develop.”

Audrey Fusco, SPAWN’s Restoration Ecologist and Nursery Manager said, “More than 65 native species are being planted, ranging from beautiful small sedges like roundfruit sedge (Carex globosa) to large redwood trees (Sequoia sempervirens), all propagated from seeds and cuttings collected by staff and SPAWN volunteers right here in the Lagunitas Creek Watershed and nurtured in our native plant nursery in Olema.”

“This is an exciting day for the thousands of community members already enjoying this public space, thanks to the efforts of The Trust for Public Land. We look forward to continuing to make this land a model of shared flourishing where humans and endangered species can coexist in harmony,” said Todd Steiner, project supervisor and executive director of SPAWN.

Additional work on the Roy’s Riffles project this summer includes widening the creek and riparian creekside habitat upstream and creating a low flow side-channel to protect juvenile salmonids during large storm events, which will ultimately help  create a larger riparian forest. The new habitat will sequester carbon dioxide to mitigate climate change and will improve habitat for land and bird species, as well as support hundreds of species of fish, mammals, reptiles, and amphibians dependent on healthy waterways.

Marin County voters opposed a ballot measure last March that would have prevented the former San Geronimo golf course from becoming a public park and wildlife open space. The property is currently owned by The Trust for Public Land.

Photos and videos are available for media to use.