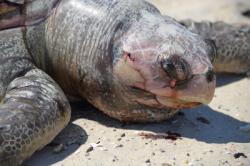 The Sea Turtle Restoration Project launched a lawsuit today after over ten months of tireless advocacy to stop the sea turtle slaughter in the Gulf of Mexico industrial shrimp trawl fishery failed to result in action by the National Marine Fisheries Service. Click here to read our press release.

The lawsuit filed Thursday in Washington claims the National Marine Fisheries Service violates the Endangered Species Act by letting some shrimpers operate without required turtle excluder devices on their nets and exempting some shrimping from the requirement.

The gear is required on many shrimp trawls in federal and state waters, but some kinds of trawls and other nets are exempt under certain conditions. A Louisiana law passed in 1987 makes it illegal for state wildlife agents to enforce turtle excluder device regulations in state waters.

The plaintiffs want a court order requiring all shrimpers to have the devices. The wildlife groups claim that more than 1,400 dead and injured turtles have washed ashore this year.

“Gulf shrimp trawling continues to be a brutal, relentless killer of endangered sea turtles – there’s simply no other way to put it,” said Todd Steiner, executive director of Seaturtles.org. “For generations, industrial shrimping has been the leading cause of sea turtle death – an atrocity that is completely unnecessary, if shrimpers used the low-cost technology that has existed for over two decades.”

Agency spokeswoman Connie Barclay said attorneys had not yet reviewed the suit and the agency typically does not comment on litigation.

Last month, the agency said its enforcement agents along the 1,631-mile Gulf Coast had been spending nearly all their time since April making sure shrimpers were using the excluder devices.

Requirements for turtle excluder devices began in the 1980s amid sharp opposition from the shrimping industry, which contends the devices cut down on shrimp catches in a business with slim margins.

The device consists of a set of bars fitted into the neck of a net, together with an escape opening. When a sea turtle is caught in a net, the reptiles move back through the net as the vessel moves forward, is stopped against the bars and is ejected through the opening.

Federal regulations allow annual “incidental take allowances” of the turtles to give shrimpers some leeway. The suit contends those allowance have been exceeded regularly.

But the lawsuit contends that MMFS is doing a poor job of enforcing regulations and has exempted some types of fishing nets from having excluders as long as shrimpers meet federal time limits for towing. The suit said those time restrictions “are difficult to properly enforce, especially with nighttime fishing, and reports indicated that the maximum time limits are often exceeded.”

The suit asks a judge to order NMFS to suspend shrimp trawling for any vessel not operating with a turtle excluder – and to close shrimp fisheries until the agency takes that action.

Groups filing the suit include the Turtle Island Restoration Network, the Center for Biological Diversity, Defenders of Wildlife and the Sea Turtle Conservancy.