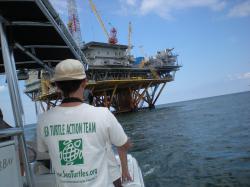 The search for BP oil spill effects has evolved along with the current conditions, meaning our Sea Turtle Action Team organized an expedition with local expert marine biologists and SCUBA divers to document any BP oil and effects we could find underwater. Dedicated Sea Turtle Restoration Project volunteers had flown to the Gulf of Mexico to help us save sea turtles from the oil and highlight their plight. With larger numbers, we charter two boats and launched from Venice, Louisiana to reach deep water as quickly as possible.

Our goal was to reach the dense mats of floating sargassum seaweed and look in, around, and under for sea turtles and oil. Secondarily, we had identified several offshore oil rigs that our guides, Captain Al Walker and Scott Porter, had dove under for many years to document the coral reefs and the myriad marine life they support. Leaving the Mississippi River from South Pass, we left the brown freshwater behind and entered the deeper green water of the Gulf quickly. Below us the ocean depth dropped from hundreds of feet to over a thousand feet. I watched as Captain Al Walker was shaking his head in disbelief as our boats passed quickly through a barren ocean usually thick with sargassum mats at this time of year.

During our voyage offshore, STRP volunteers Deb Castellena, Winnie Lam, and Tiffany Lane took meticulous notes on all wildlife sightings. I had trained them to spot and identify sea turtles and other marine life, and was proud to see them rigorously recording their observations on our data sheets. In the other boat, dedicated Sea Shepherd volunteers Brock Cahill and Charles Hermison had the same data sheets and the same rigorous approach to observing and recording wildlife. As our boats approached the first offshore rig and potential dive site, we had not seen a single marine mammal, sea turtle, or patch of floating sargassum. Very depressing.

Scott Porter has used SCUBA to document the evolution of the underwater structures on offshore oil rigs from bare metal into diverse coral reef ecosystems where he regularly sees sea turtles. He works with Steve Kolian and others on project EcoRigs, documenting, educating , and advocating to preserve these habitats when others wish to completely destroy the rigs when the wells run dry. We partnered as dive buddies, and Al Walker and Brock Cahill formed another pair of divers to explore the underwater habitat and find sea turtles.

What we discovered was un-nerving and uplifting. Coral, fish, and sea turtles have persisted, but small marine fish and jellyfish were mysteriously absent. Our video caught a Kemp’s ridley sea turtle swimming by! Scott Porter described the dive and how we had descended through an unusual layer that he described as dispersed oil. I too had seen the layer of light brown, stringy substances floating in the water column at about 10-15 feet of depth, completely out of sight from the surface. Scott pointed out dark stains on his suit and on mine, oily brown marks that rubbed off on us from contacting the marine life. Neither Scott nor Al had seen this substance rub off on their gear prior to the BP oil spill. We took samples. All sea turtles and marine life must now cope with this dispersed oil and residue throughout the Gulf.

Keeping a close watch on the surface as we sped towards home, I spotted a line of smooth water that appeared off from the blue green of the surrounding seas. Our boat slowed and we all gasped as a big, brown streak of oil appeared! Once again the pens were flying across the data sheets, the cameras were rolling and clicking, and many water samples were taken. Our team did a thorough job of documenting the oil and marine life, and our samples have been sent to accredited laboratories for oil and dispersant laboratories.

The final stretch home through the Mississippi River wetlands along Tiger Pass revealed an amazing diversity of life in the rosy light of the setting sun. We witnessed hundreds of rosette spoonbills, herons, egrets, laughing gulls, and a few alligators. It was a long day on the water and a very revealing and rewarding experience partnering with local and international groups to highlight the plight of endangered sea turtles in the BP oil spill.

FOX News 8 from New Orleans covered our expedition on a nightly news exclusive, complete with footage of the elusive Kemp’s ridley that swam by quickly