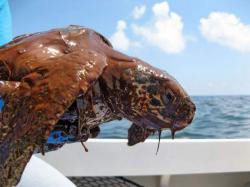 Offshore Oil Impacts Deadlier than We Know to Sea Turtles

The one-year anniversary of the BP oil spill is drawing close and we are still learning the deadly impacts to sea turtles from the largest environmental disaster in U.S. history. Today, at the International Sea Turtle Society’s annual meeting I presented on my experiences being kept “out of the box” while on a mission to save sea turtles and I learned some startling new facts about the oil impacts just released at the conference.

At least two critically endangered leatherback sea turtles were spotted in the oil slicks! During our negotiations with the U.S. Coast Guard following our successful legal action June 30, 2010 I specifically advised the rescue unit that they must have the ability to rescue an adult leatherback weighing 800 pounds or more. The technology exists, BP must pay to use it for the benefit of the leatherback.

Work is progressing towards improving rescue and response for sea turtles in the next oil spill. Our work is joined by work underway at the Oiled Wildlife Care Network who is taking lessons learned from the BP spill and updating their protocols for rehabilitation care.

This year and many more to come will tell the true tale of the deadly impacts from the BP oil spill to our endangered sea turtle populations. Knowing the chronic, long-term effects from oil exposure can cause cancer before death, it could be a long and painful road for the Gulf sea turtles who still forage in oily sands left by BP.