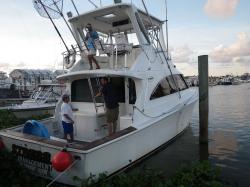 Onboard with the Unified Command Sea Turtle Rescue Team

Our target search area was a large congregation of sargassum that had been spotted by helicopter over 40 miles offshore of Louisiana and west of the Deepwater Horizon wreck site. We reached our destination and began searching for sea turtles and oil. Our team was joined by a smaller boat that could maneuver quickly and more efficiently capture the sea turtles. The first sea turtle, and immature Kemp’s ridley, was captured in the first half an hour by the smaller boat. It was weighed, measured, tagged and cleaned out of sight of our team. After being carefully transferred to our boat, the team of veterinarians further inspected the lively young sea turtle and took a blood sample. No visible oil was seen on the sea turtle or the towel used to carry it, but the capture boat did originally report it as lightly oiled.

After four hours of searching in the sargassum we observed 2 Kemp’s ridley juveniles. I was both sad and disappointed that the professional team working for months in the Gulf could only locate a pair of Kemp’s ridleys in an area usually teaming with life and home to five species of sea turtles. Apparently, our boat team did not have either the range or time to travel the additional 30 miles to reach the forecasted “rip line”, the area where the clean green water ends and deep blue water begins. This convergence zone is the habitat that sea turtles prefer and the area where any remaining oil is likely to exist.

It was frustration to hear our suggestions on ways the sea turtle rescue teams could have been expanded or improved disputed because “too many regulations exist” to modify the incident response operations.

The sargassum that serves as the nursery habitat for sea turtles, cover for juvenile and adult fishes, and home to myriad invertebrates had no obvious signs of oil in the small area we inspected. Hauling some on deck, our team found juvenile crabs, shrimp, and some encrusting bryozan epiphytes. Fishes were observed under the biggest of the sargassum patches, usually patches bigger than a basketball court.

However, another massive “oil” pollution problem was readily apparent from the second we approached the first patch of the sargassum habitat. Plastic pollution and marine debris littered the sargassum mats at an alarming density. Hundreds of items could be seen in each patch, from plastic lawn chairs to plastic forks. Plastic bags that looked just like jellyfish floated near broken plastic buckets and were surrounded by sargassum. While BP is ready to vacate its cleanup responsibilities on the open ocean because their oil in now dispersed in the lower water column, there needs to be a new wave of cleanup crews deployed to tackle that plague of plastic polluting the essential sea turtle and fish habitat in the Gulf of Mexico.