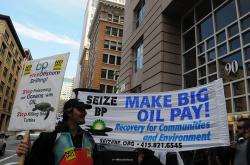 The Sea Turtle Restoration Project joined a protest rally on World Oceans Day to share the catastrophic story of endangered sea turtles that are dying by the hundreds in the Gulf of Mexico due to the BP oil spill. Dozens of protesters gained the attention of BP executives as they marched, shouted, and shared their outrage outside of BP’s corporate offices in downtown San Francisco, California. STRP’s Chris Pincetich led volunteers and interns Angie Rodoni, Cole Chase, and Stephanie Wang to get petitions signed, pass out STRP newsletters, and share the plight of the endangered Kemp’s ridleys with all who attended. The event was coordinated with a nation-wide effort by the group Seize BP to protest against BP’s corporate blunders, cover-up, and slow response to address the worst oil spill in U.S. history.

In the wake of World Ocean’s Day, experts detail BP’s cover-up that millions of gallons of dirty oil could be leaking EACH DAY into the Gulf of Mexico.

BP’s claim that it is capturing 630,000 gallons a day in it’s top hat pipe combined with new estimates from the first high-definition underwater video released by BP yesterday support a worst-case scenario estimate.

“In the data I’ve seen, there’s nothing inconsistent with BP’s worst case scenario,” Leifer was quoted as saying.

Sea turtles throughout the Gulf continue to nest, but in much lower n  umbers than observed at this time last year. The Incident Command released the following sea turtle statistics today

To date, visible evidence of oil has been documented externally on 28 live sea turtles and 2 dead sea turtle captured during directed turtle surveys. Of the 272 stranded, 55 full necropsies have been performed.

To read more on the BP cover-up and criminal investigation: http://www.sfgate.com/cgi-bin/blogs/ybenjamin/detail??blogid=150&entry_id=65378#ixzz0qOL3e2cE