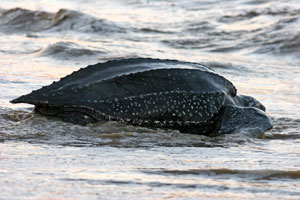 A rare endangered leatherback sea turtle was spotted off the Golden Gate this past weekend, an apparent early and rare arrival to the area.

“It’s definitely early,”said Todd Steiner, who heads the Olema-based Turtle Island Restoration Network. “And it’s rare to see one because their numbers are so low.”

Leatherback turtles, which feed on jellyfish off the coast of Marin in the summer through fall, typically arrive in August. Recognizing their shrinking numbers, in 2012 the federal government established the Pacific Leatherback Conservation Area, which prohibits drift gill net fishing between Aug. 15 and Nov. 15 along California from Point Sur north, some 16,000 square miles.

Because of their enormous size, the turtles also get tangled in long fishing lines and nets intended for swordfish.

“The turtles are not targeted, but they are bycatch and can drown once they get caught in a net,” said Steiner, who wants to see a complete ban on the use of gill nets.

Lobbyists for the fishing industry have said bycatch rates have lessened and that new technology will bring them down further.

The leatherbacks swim 6,000 miles from their nesting grounds in Indonesia to the West Coast. The hulking leatherbacks can weigh up to 2,000 pounds and stretch 6 to 8 feet long. They can swim up to 3,000 feet beneath the sea while journeying thousands of miles to feed on the jellyfish after nesting.

A 2013 study found that the Western Pacific population of leatherback sea turtles, which includes the leatherbacks that feed in West Coast waters, has continued to decline since the 1980s.

If the trend continue, extinction may be inevitable in 20 years because the number of turtles will be so low, predicted the University of Alabama study.

Pacific leatherbacks were designated as the state’s official California marine reptile symbol in 2012.