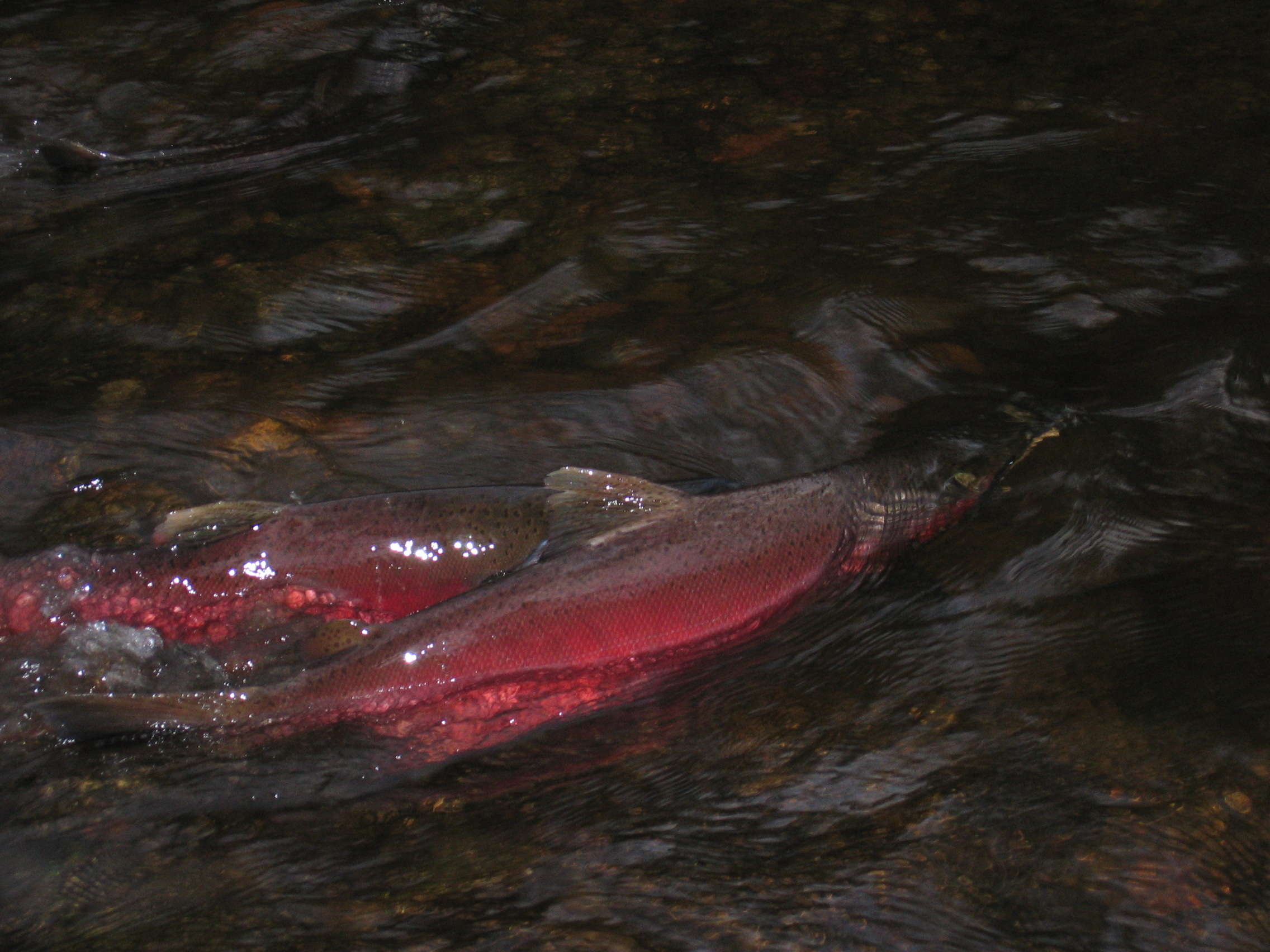 Forest Knolls, CA – The heavy rains of December and January have brought endangered coho salmon up into the small tributaries of the San Geronimo Valley for the first time in years, as did the early rains of October, which brought Chinook salmon in Woodacre Creek for the first time ever documented.

According to SPAWN’s records, no coho have been seen in Montezuma Creek since the winter of 2004, and none in Larsen Creek since winter 2006, where Hayes saw both coho salmon and steelhead trout this week.

“It is amazing to see these giant two-foot fish in the small creeks, some no wider than than six feet wide. This is extremely exciting and is the result of big storms that have let coho salmon maneuver through culverts under roads that are a barrier to migration under lower flows,” Hayes said.

Preston Brown, SPAWN’s Director of Conservation, notes not just total annual rainfall is important, but the amount that falls over a short period is equally important, and opens up salmon habitat in the San Geronimo Valley, “Rainfall has to be just right to allow fish to jump into and swim through artificial culverts that concentrate flow and increase velocity.”

In the 1990s, when SPAWN started conducting surveys in the small tributary creeks of San Geronimo for spawning salmon and fish rescues in summer for juvenile coho and steelhead trout when creeks in the small tributary creeks in San Geronimo, SPAWN regularly found fish in Larsen and Montezuma Creek. It has been years since these fish have been seen in these systems, making Hayes’ sighting of these fish noteworthy.

In Forest Knolls, the first sight of coho salmon in Montezuma Creek in years can be seen on this video posted on SPAWN’s Facebook page.

Throughout the San Geronimo Valley, creek residents are ecstatic and expressing amazement in seeing salmon in their tiny backyard creeks for the first time in decades.  Heavy rains have allowed salmon to navigate into creeks that are often not passable by road culverts.

Brian Staley, a resident of Woodacre since 1987, said, “For the first time I have seen in my lifetime, salmon are spawning as far up the watershed as the end of Oak Grove Avenue. Big healthy animals are a fantastic thing to see!”  Similar comments have been showing up on social media.

Some of the score of comments from users reflected the same excitement. Remarks included “Amazing.” “Awesome.” “Fabulous.” “Very exciting – spawning is such fun to see. Bless our fish.”

Todd Steiner, the founder of SPAWN and its executive director, stated, “This spawning season demonstrates the importance of the San Geronimo Valley and its tributaries to the recovery of coho salmon and steelhead trout in Marin. We need to protect creekside habitat, limit construction of new impervious surfaces, and continue to remove all barriers to fish migration by replacing our old culverts, many decades old and in need of repair with fish-friendly culverts.”

“It was a joy to see coho spawning in the newly completed restoration project site during the planting events we held with volunteers throughout December,” said Audrey Fusco, SPAWN’s plant ecologist and nursery manager.

Removal of the dam, coupled with the similar heavy storms in December, allowed Chinook salmon— also called King salmon—to Woodacre Creek. Chinook salmon are a larger salmon species considered more of a “river” spawning fish and normally spawn earlier. These fish spawn in lower Lagunitas Creek closer to Point Reyes Station where the creek is wider and deeper, and not dependent on early rains to open up its spawning grounds.

“We can bring back the salmon of Marin from the brink of extinction if we care enough to protect and restore habitat.  We have the know-how and the State and federal agencies have offered the resources.  It boils down to our local elected officials having the courage to enact the regulations that will protect the habitat the fish need to survive for our children and grandchildren,” said Steiner.

The Salmon Protection and Watershed Network (SPAWN) is a program of the global ocean conservation non-profit Turtle Island Restoration Network that protects endangered, wild coho salmon and the forests and watersheds they need to survive in West Marin County, California. Learn more at www.seaturtles.org/salmon.