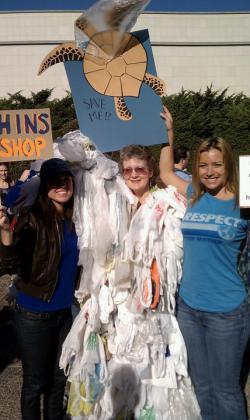 Saving Sea Turtles from Plastics on the Streets of Los Angeles

Sea turtle advocate and STRP supporter Ashley Platz rallied with oceans activists led by folks at Heal the Bay on the steps of the Hall of Administration on Temple Street in Downtown, Los Angeles to support a plastic bag ban. Here is her story from the front line:

Everyone was wearing blue shirts and holding signs that read slogans like; “Ban The Bag,” “Dolphins Don’t Shop,” & “$21 every second is wasted making plastic bags.”

This friendly group of a few in blue, soon grew to a small friendly mob of chanting hearts. Tons of attention was grabbed from the media, to pedestrians, to city employees on their way to work and even some drivers passing by the scene.

By 9:30 am all attention was on us.
Even with my background in oceans and sea turtle conservation I was astonished to learn some of the more recent numbers, such as 1 shopper per year will use on average 500 plastic bags. Learning and acting to solve problems for sea turtles is why I think this rally was fantastic, and because of all the facts behind the horrors of plastic bag pollution I am not surprised that LA County passed the plastic bag ban. I am proud to live in a county that listens to it’s people and respects the fact that GREEN jobs will be brought into Los Angeles to create the fabric shopping bags that will soon be a requirement.

The Los Angeles County Board of Supervisors put the plastic bag ban measure to vote, and it passed 3-1! This historic decision will need to pass another vote to finalize the language of the future ordinance, which will go in to effect in 2011. Click here to read more about this historic decision.

I was really proud to represent the sea turtles as a volunteer with the Sea Turtle Restoration Project (STRP). Being far from their main office hasn’t stopped me from making a big difference, whether it is attending a local rally, using my Facebook page to share STRP action alerts, or creating the STRP Facebook Cause page, which now has over 15,000 supports!