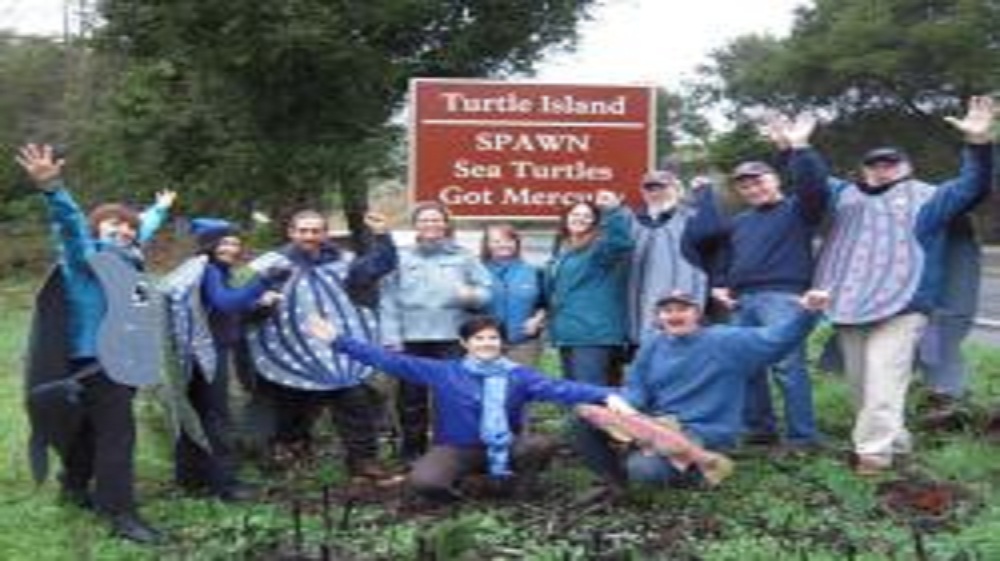 “Wear Blue for Oceans Day” encourages everyone to wear blue on January 13 to demonstrate support for ocean protections that will ensure healthy habitat for ocean and coastal fish and wildlife, including all seven species of endangered sea turtles. Rallies will be held in San Francisco, New Orleans, Washington D.C., Honolulu, Cambridge, Galveston and Tampa to send a message to President Obama before he releases a final ocean policy later this month.

Who: People wearing blue and dressed as sea turtles will rally to urge President Obama to adopt a strong new ocean policy that protects sea turtles, salmon, whales and all marine life.

Sea turtle conservationist and biologist Wallace J. Nichols will speak about threats to sea turtles outside the Golden Gate and around the world.
What: National “Blue Day” Rally for the Ocean
Where: City Hall, San Francisco (Goodlett steps)
When: Wednesday, January 13th, 11:30a.m.to 1 p.m.
Why: Last year President Obama commissioned a Task Force to develop a recommendation for a national ocean policy, as well as a framework for marine spatial planning. The Task Force has done its job, and now it’s up to President Obama to issue an Executive Order creating this policy. He is expected to release a final ocean policy report soon.

“With sea turtles and many ocean species slipping quickly toward extinction, it is clear the current ocean policy is not working. President Obama needs to push through an approach that relies on science and not on fishing, fossil fuel and other industry interests,” said Teri Shore of Turtle Island Restoration Network (TIRN). “If everyone concerned about the health of our oceans and the survival of not only sea turtles, but all fish and wildlife wore blue on January 13, it would send a strong message to President Obama that it’s time to make ocean health a national priority.”

So far, President Obama’s record on sea turtle and ocean protection has been mixed: Just after New Year’s, the U. S. government proposed for new protections for leatherback sea turtles along the West Coast of the U. S. However, just before New Year’s his fisheries managers approved the expansion of the deadly Hawaiian longline fishery and the tripling of loggerhead sea turtle capture.

“If everyone concerned about the health of our oceans and the survival of not only sea turtles, but all fish and wildlife wore blue on January 13, it would send a strong message to President Obama that it’s time to make ocean health a national priority,” said Buffy Martin Tarbox.

Turtle Island Restoration Network is an international marine conservation organization headquartered in California whose 10,000 members work to protect sea turtles and marine biodiversity in the United States and around the world. For more information, visit www.SeaTurtles.org.