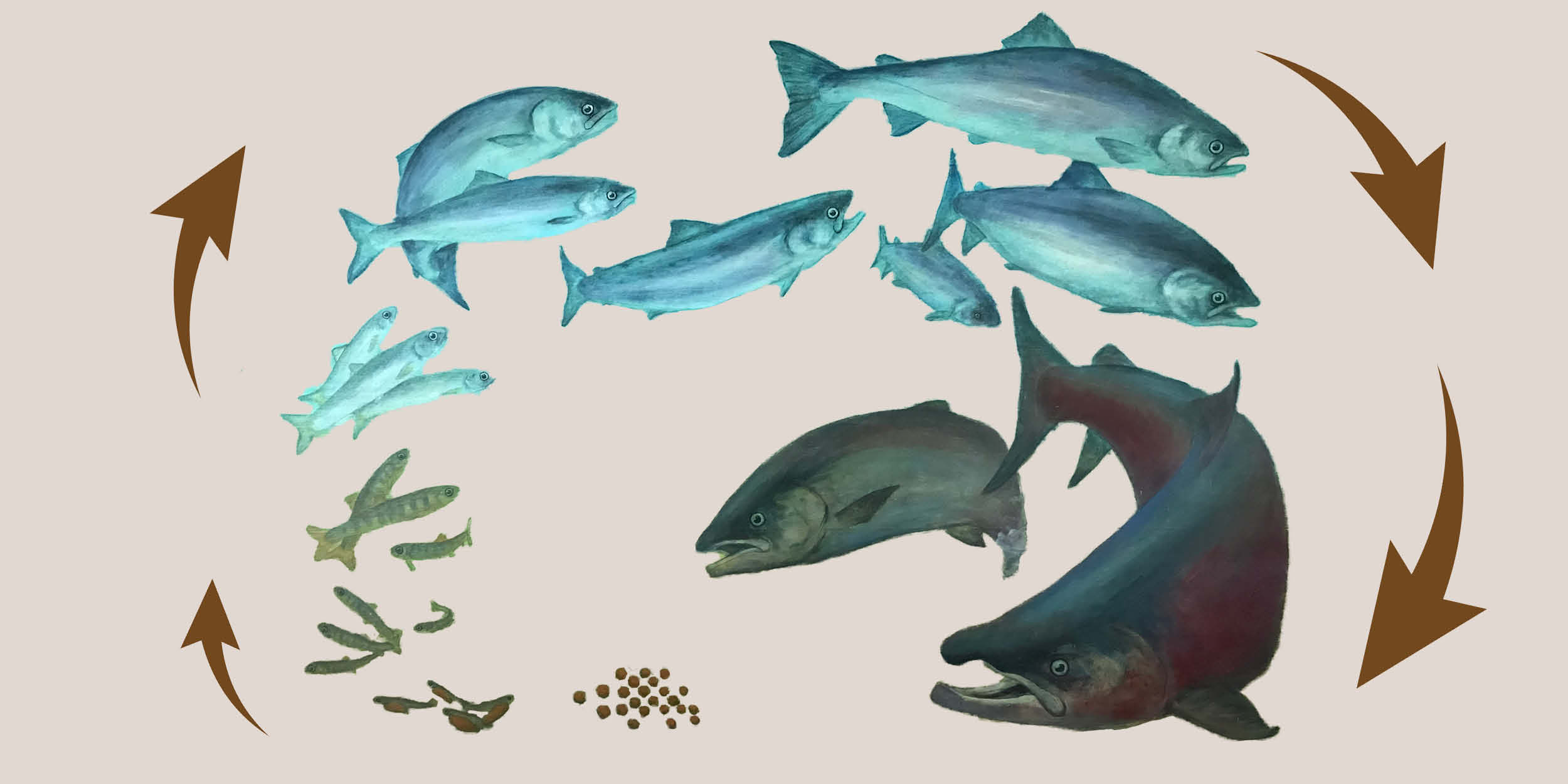 The Inspiring Lifecycle of Coho Salmon

Coho salmon are an anadromous species, meaning they migrate from the ocean to their freshwater natal streams to spawn, or build nests (called redds). The anadromous life history of salmon plays a key role in bringing nutrients from the ocean back to rivers and the watershed wildlife community. 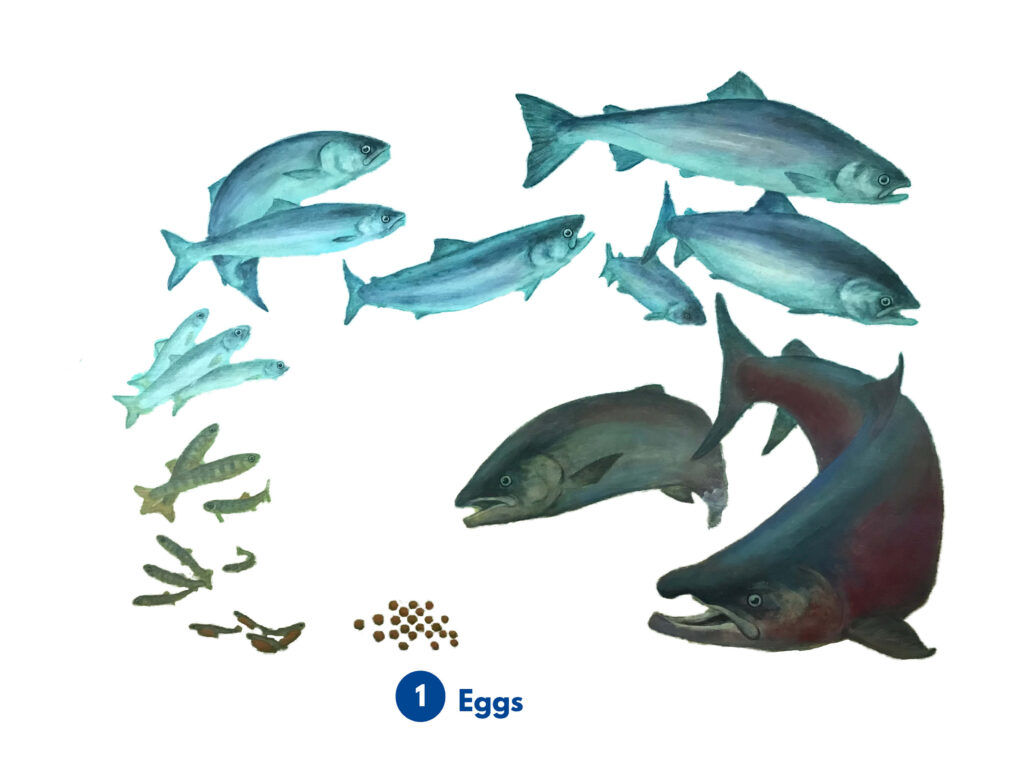 Stage 1: Eggs. Each batch contains 300 to 1,200 eggs. Eggs will usually hatch in early spring, and will take 50 to 70 days to hatch depending on water temperature. 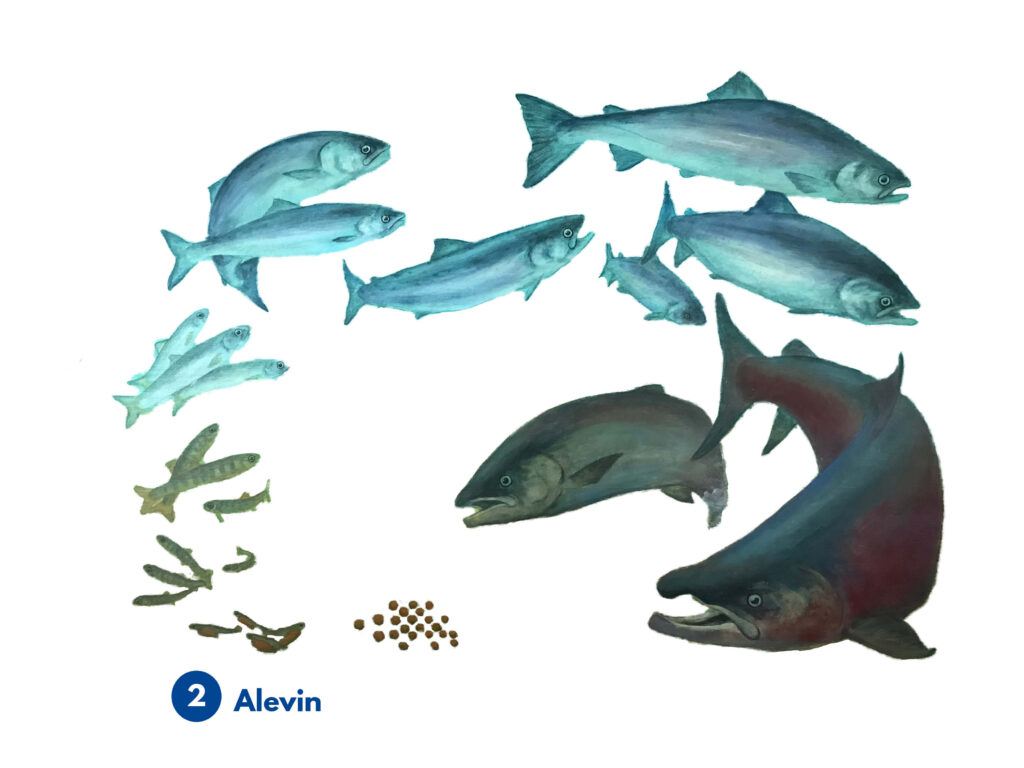 Stage 2: Alevin. Embryos remain and develop in the gravel, consuming an attached yolk sac for the 35 to 45 days it will need to work its way out of the gravel bed. 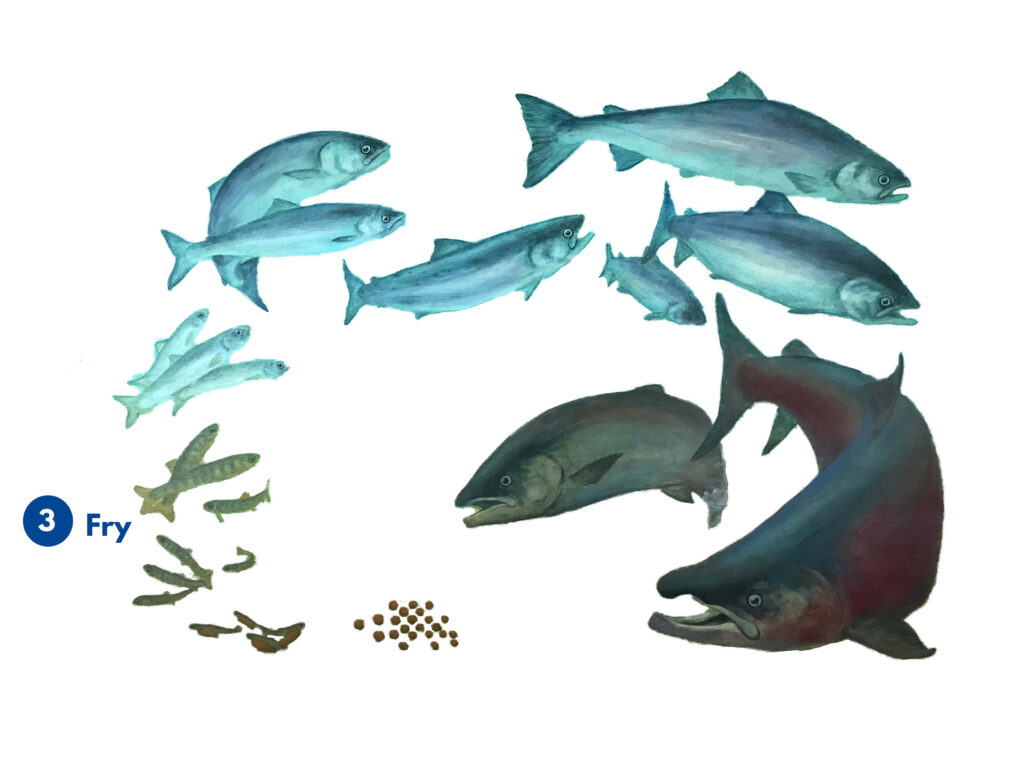 Stage 3: Fry. Each tiny fish, called fry,  emerge to live in shallow stream margins and once old enough, defend their territory. They live in ponds, pools in rivers and streams in quiet and calm areas. There they hunt insects. 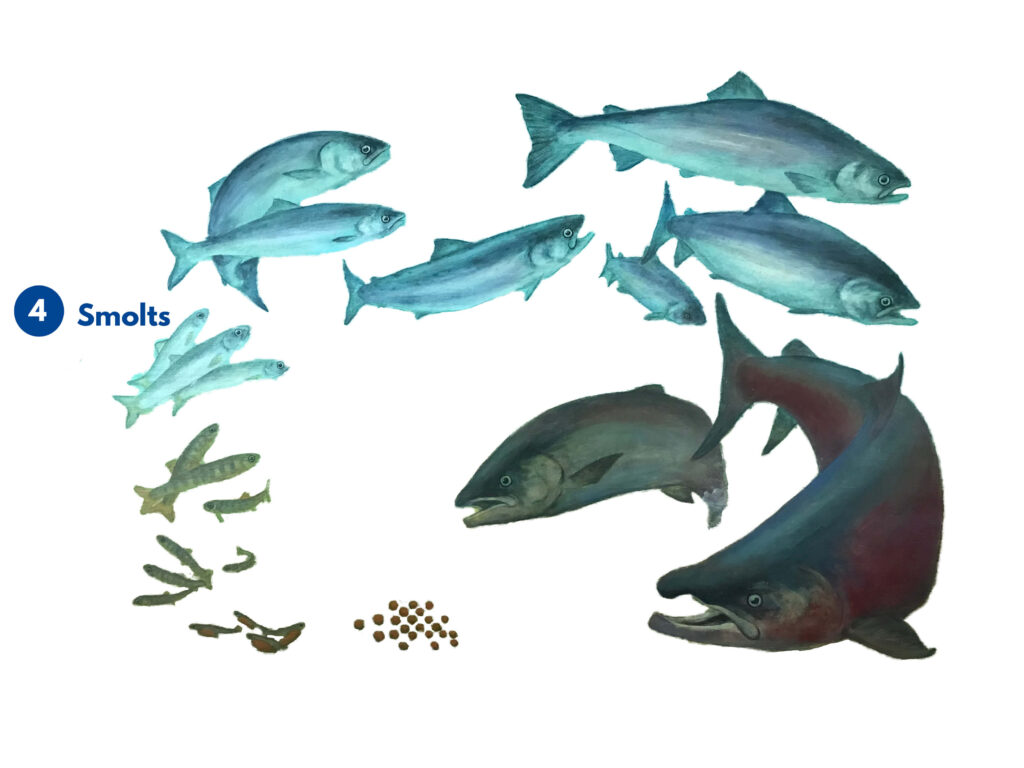 Stage 4: Smolts. After surviving in the stream habitat for nearly 16 months, juvenile Coho begin a transformation to a life-stage know as smoltification, which enables them to move from freshwater to saltwater. The transitioning smolts begin downstream migration in March, peaking in May. They usually move downstream in schools of 10 to 50 fish. Upon reaching the saltier water, they undergo a physiological adaptation to the new environment. 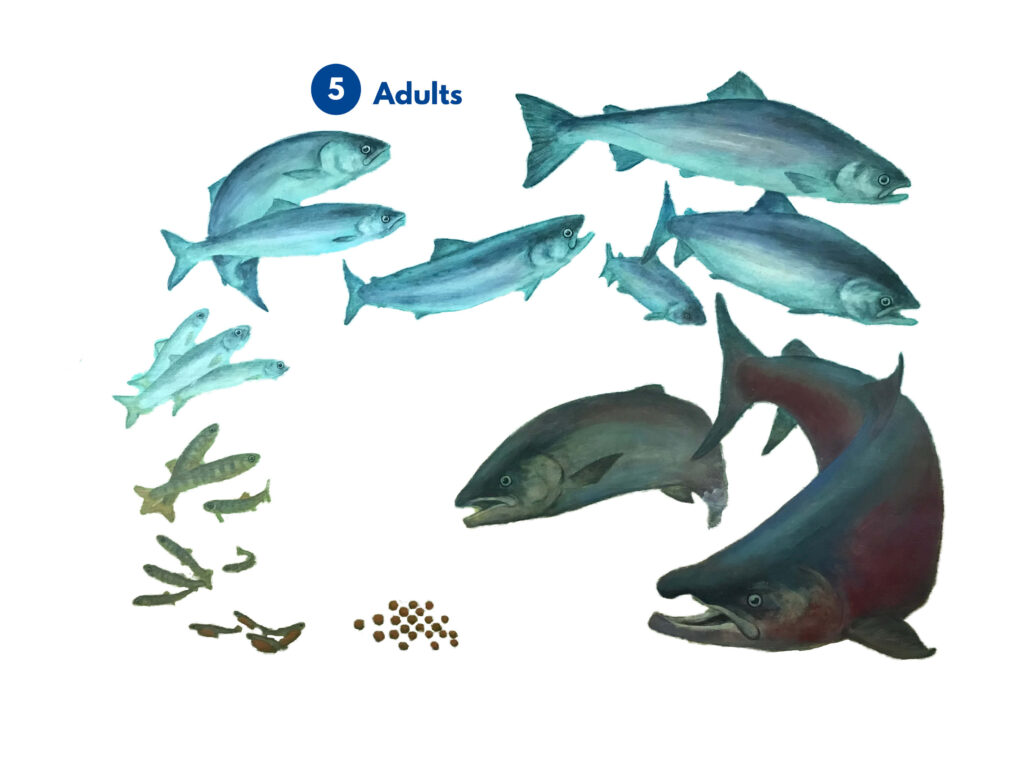 Stage 5: Adults. Upon entering the ocean, juvenile Coho grow rapidly. The 5- to 6-inch smolts are known to grow over one millimeter per day in their first year as they feed on squid, crustaceans and small fishes. Coho adults typically remain in the ocean for about 16-18 months before returning to their natal streams. They weigh 6 to 9 pounds and usually span up to 24 inches in length. Their return to the spawning grounds is the completion of their life cycle. 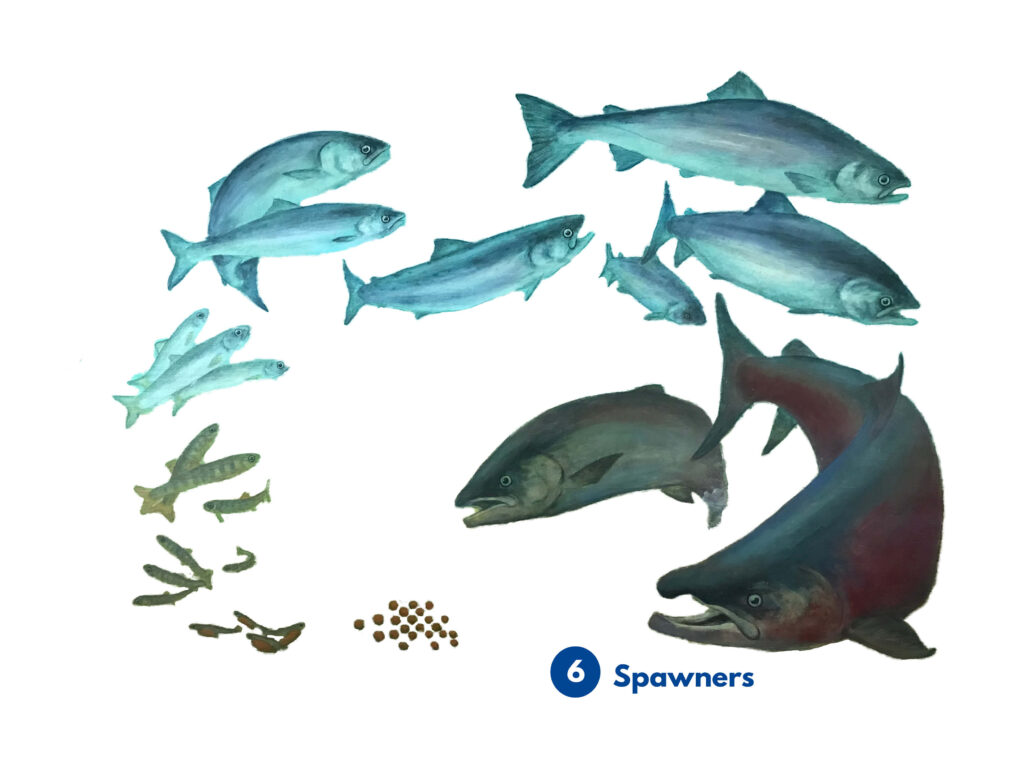 Stage 6: Spawners. Salmon spend two to seven years in the ocean before returning to the freshwater streams and rivers where they first emerged as fry to build nests (called redds) in an area of coarse gravel. As a female discharges her eggs into the redd, a male fertilizes them. All Coho die after spawning—the dead and dying fish are a valuable source of nutrients for plants, insects, birds and mammals, and are a vital component to the structure of this fascinating ecosystem.

The Salmon Protection And Watershed Network has been dedicated to protecting California’s most important run of endangered coho salmon in West Marin County since 1990. Click here to support our work by making a tax-deductible donation today.