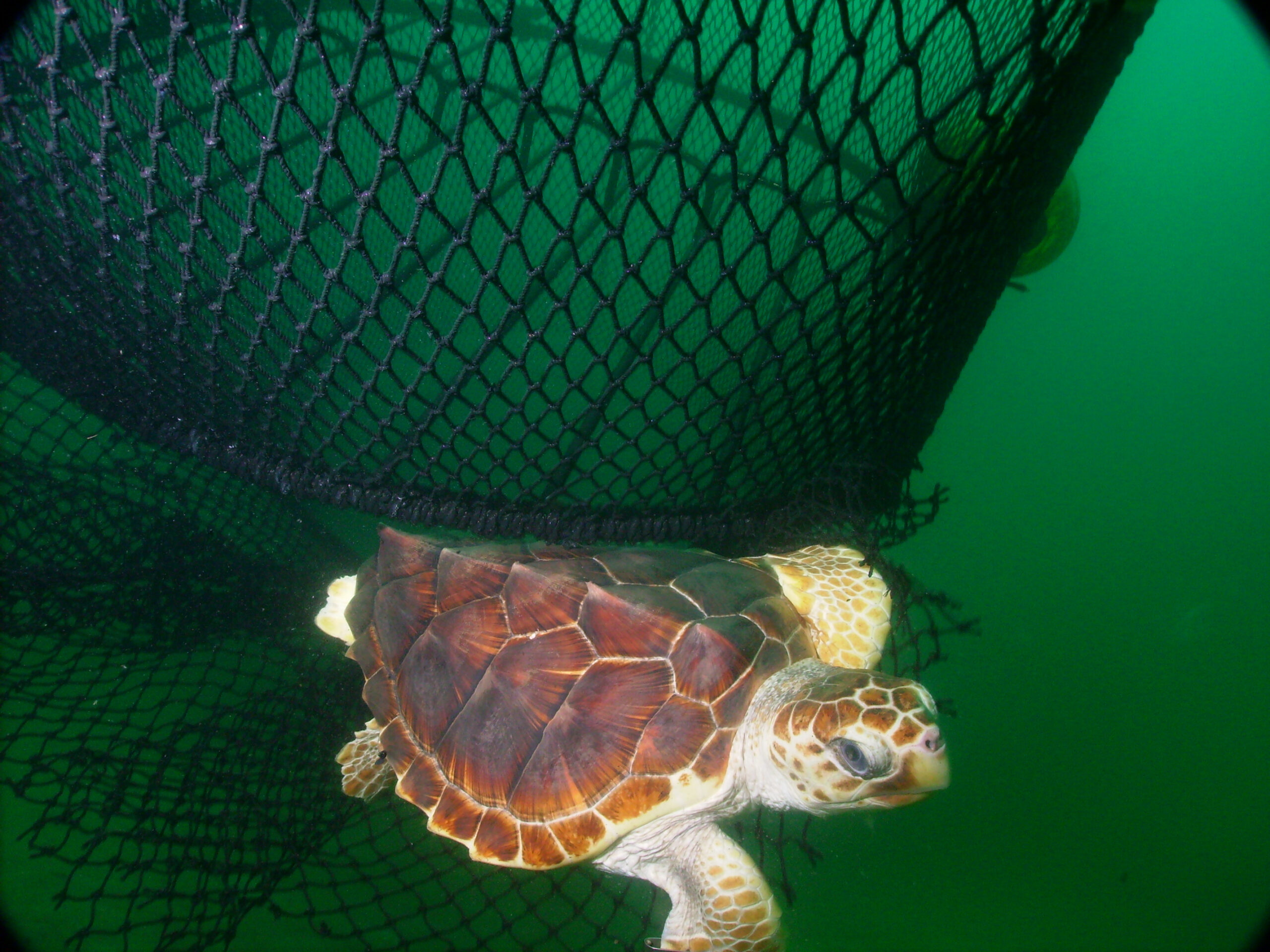 A Seafood Watch assessment of the U. S. shrimp fishery in the Gulf of Mexico has for the first time listed all Louisiana wild-caught shrimp as “red” and warned seafood consumers to “avoid” eating or buying it due to its harm to endangered sea turtles. Louisiana is the only state that prohibits enforcement of federal Turtle Excluder Device (TED) regulations in its shrimp trawl fishery.

“We have worked for years asking Louisiana to step forward, obey the federal law and save countless endangered sea turtles that migrate along their coast,” said Todd Steiner, Executive Director of Turtle Island Restoration Network (SeaTurtles.org).  “Their refusal to cooperate has landed them on the RED or AVOID list of the Seafood Watch consumer guide.”  Read more about the Louisiana shrimp fishery here. See NGO Coalition letter to Governor Bobby Jindal here. See Scientists Letter to Governor Bobby Jindal here.

The red-listing of Louisiana shrimp comes just as the international sea turtle conservation community is planning its 34th annual Symposium on Sea Turtle Biology and Conservation in New Orleans on April 10-17, 2014.

“This conference will be an ideal time for the state of Louisiana to repeal its obsolete law and begin protecting sea turtles in their state waters,” said Carole Allen, Gulf Office Director of the Sea Turtle Restoration Project and a campaigner for TEDs when the original federal law passed in 1987.  “Louisiana can show the world they care about marine resources as well as the laws of the United States and get their shrimp off the AVOID list.”

The Seafood Watch website points out that retailers and restaurants play a crucial role in the conservation of ocean resources and their customers can save endangered sea turtles by not ordering seafood that is caught by fishermen who choose not to implement a federal law.

A Louisiana state law dating back to 1987 prohibits the enforcement of TED regulations in state waters where most shrimp fishing occurs and thousands of sea turtles are caught and drowned each year. Louisiana has the nation’s largest shrimp fishery.

Tens of thousands of endangered sea turtles drown every year in the U.S. shrimp fishery. Most of them are critically endangered Kemp’s ridley sea turtles along with loggerheads and green sea turtles.

In early 2013,  National Marine Fisheries Service failed to close a loophole and require all shrimp boats to use Turtle Excluder Devices (TEDs). Instead, the agency will allow as many as 20,000 sea turtles to be captured by skimmer trawls that operate primarily in the shallow waters and bays of Louisiana in violation of the U.S. Endangered Species Act. Read more about the failed regulation here.

In response, Seafood Watch has also red- listed all Gulf of Mexico shrimp caught with skimmer trawls and recommends that it be avoided.

Shrimp trawling has for many decades been the primary threat to sea turtle survival in the United States. The shrimp trawl fishery incidentally captures and kills thousands of threatened and endangered sea turtles each year.

“Turtle excluder devices,” or TEDs, prevent turtles from drowning in shrimp trawl nets, but poor compliance and lax enforcement are thought to have led to thousands of sea turtle deaths in 2010 and 2011. Currently skimmer trawls can use tow-time restrictions instead of TEDs to avoid drowning sea turtles. Tow times limit the amount of time shrimpers can keep their trawls in the water, but evidence is mounting that even when these restrictions are followed, skimmers drown turtles.