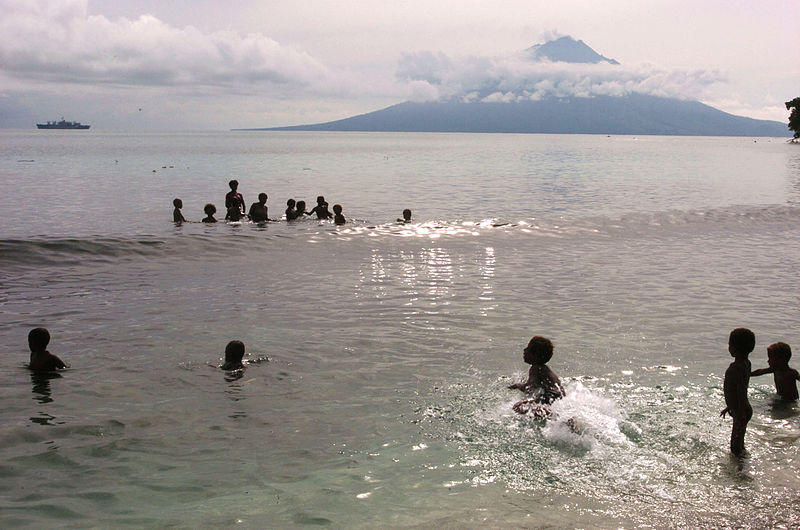 Bababag Island, Papua New Guinea â€“ This week tribal villagers from Bagabag Island in Madang Province called on the government and all exploration and mining companies doing business in Papua New Guinea to stop pushing for the sea bed mining, a controversial new mining method. The villagers formally lodged their concerns and protests by running an advertisement in the national paper.

Deep sea mining is a new and untested mining method which would use remotely operated underwater mine cutters to scour the ocean floor to pump copper and gold ore to ships on the surface and then transfer to barges for land-based processing. While deep sea mining is regulated in international waters, it is not regulated in Papua New Guinea waters, a country in which coastal villagers depend on healthy marine ecosystems to feed their families.

More than 2000 indigenous tribal people of Bagabag Island have voiced their frustrations and absolute disgust over the manner in which the provincial and national governments have issued license to Nautilus Minerals Corporation Ltd to conduct deep sea mining activities near Bagabag Island and in the surrounding outer islands in the province.

Their spokesmen, Paul Daing, executive director for the Bagabag Community Development Association and Rev. Kinim Siloi, lecturer at the Martin Luther Seminary reiterated that they have not been consulted nor have they given their consent for the operations of this mine.

Mr. Daing and Rev. Kinim said they will not allow this mine to carry out its exploration as it will destroy their marine ecosystems which they depend on for their survival. Both spokesmen warned that they will take appropriate action to protect their way of life, their resources and their future generations if their call on the government and Nautilus is not taken heed of.

â€œFor 50,000 years, the people of PNG have lived a subsistence life style in harmony with our natural environment. We have the right to determine our own destiny and at its own pace. Development in PNG should take place at its own pace, and not be imposed by multinational corporations who see our resources as profits, and the PNG government should put the interests and dreams of the people of PNG before that of outside interests,â€ they stressed.

Mr. Daing and Rev. Kinim said Nautilus has no experience in sea bed mining and therefore do not want to see their ocean as a training ground for this company.

Information gathered from their research indicated that international scientists raises questions about the unknown impacts that nutrient rich water may have on their precious and life giving coral ecosystems. The representatives further raised concerns in regards to the volcanic activity in the area and pointed out that the operation of the mine in a highly volcanic area is of great concern to the safety of their villagers.

Land-based mining in Papua New Guinea has a poor environmental track record that often has had adverse impacts on local communities. Mr. Daing and Rev. Kinim added that the recent pollution and destruction of the Auga and Angabanga rivers in the Central province resulting from the waste dumped by the Tolukuma mine shows that land based mines are not adequately controlled and have set a precedent for ocean mining that must be corrected.

Furthermore they highlighted the negative impacts of mining on the communities and the environment experienced in Bougainville, OK Tedi and Pogera that out weights the limited and disproportionate economic benefits gained in these communities and fear that this is likely to happen in Madang with the sprouting of mining activities in the province.

â€œWe are subsistence farmers, we have the right to control our own development. We had enough of being controlled by outsiders,â€ they demanded.

The people of Bagabag Island wanted answers to the following questions:
– â€œWhere will we live if there is going to be a disaster by the mine?
– â€œDoes the government and the MRDC have safety plans in place for us?â€and
– â€œWe are experiencing a global problem of global warming and rise in sea level, why create another problem?â€
â€œWe call on the government of Madang as well as the National Government to take our concerns seriously into consideration. We demand the government to execute proper consultation processes,â€ said Mr. Daing and Rev. Kinim