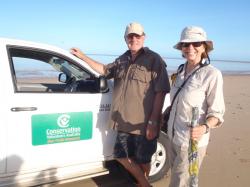 Last night I spent almost the whole night out on the beach with our crew of “turtle wranglers” and today slept all day and through dinner! It was a long night but exciting.

It was a all-girl team of four working with Glenn the research leader. I’ve learned first-hand that Australian flatbacks are far more skittish than the loggerhead. So instead of working with the turtle after she goes into her egg-laying trance, we must wait until it is done nesting and headed back to sea to tag, measure, get DNA. That means we need to stop the turtle as it heads for home, the ocean. Last night we ran into one big, strong female at high tide. So there wasn’t much sand between us and the water.

Rika, our Japanese student, was the on-point wrangler for this turtle. But she could not stop her. So I jumped in and was face to face with the sea turtle, hands on either side of her head pushing against her shell. I was able to slow her to a stop. But when Glenn clamped the tags into her flipper, she was not pleased and started hissing and snapping. Yes these sea turtles hiss, kind of like a cross between a cat and a dragon!

The turtle was like a tank pushing down the slope so a third woman, our French delegate from Shell, joined the frontline trying to hold her back. Then there was the second tag. Ouch! Run to the sea. We started getting wet from the surf. Now for the DNA sample! Ouch, hiss, push, slide.

Finally as the tide started washing over our legs, Glenn was done and the turtle released! We collapsed in the sand, exhilarated and exhausted. The sea turtle, unharmed, slips back into the sea.

And that was just the beginning of the night! We had one more turtle which was much more docile to work with. Then we observed several false crawls, and stopped to check on several nests due to hatch; and finally got back to camp by 3 am. We slept until 4:30 am in our tents – this was our first night camping down the beach at Jack’s Creek, 12 kilomoeters from the resort.

After we got up for the morning drive-by patrol (the only time we use the truck) and had to stop numerous times to mark and measure tracks and nests from turtles we missed during the night.

We also needed to exhume two nests that had hatched. In one,  we found two live hatchlings in the nest that had not made it to the surface. Because the tide was now so low [it’s been a 7 to 9 meter tide variation], we had to drive a ways and then walk across the mud flats to release the stragglers.

And then another set of tracks to measure and mark! So we finally got back to camp at 7:15 am, time to shower and eat breakfast at 8 am. Then I went back to bed and slept all day, literally sleeping until 5 pm and missing dinner, which we eat early at 4:15 pm due to the sea turtle patrol schedule.

One of the turtle leaders came to wake me up! I was lucky that when I came down to the main area that the cook took mercy on me and served me up a plate!

Now I am wide awake and will probably just stay up until my shift begins at 12 midnight to 3 am!

Photos of sea turtles by Dave and Fiona Harvey, a naturalist couple who lead turtle and whale tours for EcoBeach Resort. They are lovely people who just left here as it is the end of the season. If you want to contact them about photos, they can be reached at dave_and_fiona@hotmail.com  Please don’t use photos without permission! All of our sea turtles have come sshore at night when no flash photography is allowed! The Harveys have been fortunate enough to capture several daylight nesters!