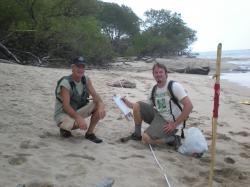 Our work petitioning and educating the community about the critically endangered Pacific leatherback has led to Governor Jerry Brown signing our bill to recognize the Pacific leatherback sea turtle as the official California State Marine Reptile (AB1776 Fong). With this bill passed, we plan to continue to pursue increased education in the schools and the community about this remarkable species and promote its continued presence off California coasts and throughout all oceans. Check out the story in the Ventura County Star, which appeared on the front page, or read below to learn about how this story unfolded:

The 1,000-pound, 6-foot-long Pacific leatherback sea turtle will join the ranks of the California grizzly bear, poppy, golden trout and the exclamation “Eureka” — among others on the state’s symbols list — as the official marine reptile of California.

But the distinction would not have been possible without a marine biologist with Ventura roots working with the state Legislature for more than two years until Gov. Jerry Brown signed the unanimously-approved bill into law last month.

Chris Pincetich, a 1992 Ventura High School graduate, came up with the idea to give the Pacific leatherback statewide recognition and began drafting a bill in August 2010 with his co-worker at the Turtle Island Restoration Network, a Marin County-based nonprofit.

Known as the largest and most migratory sea turtle, the leatherback — the only sea turtle without a shell but with a layer of tough, leathery skin instead — commonly swims 6,000 miles to the California coast to feed on jellyfish after laying eggs in Indonesia, Papua New Guinea and the Solomon Islands, according to the new state law. The estimated population is between 30,000 and 40,000.

The leatherback was declared an endangered species in 1970, but Pincetich said little has been done to prevent the 100-million-year-old turtle’s deterioration. The species has declined by 90 percent over the past 25 years, according to the law.

“One of the most important aspects of the Endangered Species Act is not only do you put them on a list, but you figure out what their habitat needs are and you work to protect those habitats,” Pincetich said. “That has been a process that has been largely ignored.”

A month before the leatherback bill was introduced this year to the Legislature, the National Oceanic and Atmospheric Administration’s National Marine Fisheries Services finished a five-year investigation that established 42,000 additional square miles of protected critical habitat for the leatherback sea turtle, offshore of California, Oregon and Washington.

Before then, the only critical habitat for the species was less than one-third square mile of St. Croix in the U.S. Virgin Islands that was declared in 1979, according to the Federal Register.

“There was a lot of action in the 1970s and then it kind of stalled forever,” said Pincetich, who was involved with the 2007 petition to the National Marine Fisheries Services to revise the critical habitat designated for the leatherback.

Assemblyman Paul Fong, D-Cupertino, introduced the bill to proclaim the leatherback the official marine reptile in February and it received unanimous approval during each committee and floor vote.

“By spreading awareness about the leatherbacks and how to help them, this bill will encourage and invite others states and nations to preserve these majestic creatures for the benefit of future generation,” Fong said in an email. “One of the most effective ways to protect endangered marine wildlife from extinction are the links between governmental, educational and preservation advocates to spread awareness of the importance for the overall protection of all endangered marine wildlife.”

Other than putting the Pacific leatherback on the list of California symbols, the law also “urges” state and federal agencies to “prevent further threats to Pacific leatherback sea turtles,” encourages public schools to incorporate the species into curriculum, and designates Oct. 15, 2013, as the inaugural Pacific Leatherback Sea Turtle Conservation Day.

Lorilee Johnson, a marine biology teacher at Ventura High School, said she was happy that a Ventura High graduate was partly responsible for giving the leatherback statewide recognition.

“It’s awesome that a Ventura High School student is carrying on with that,” she said. “A lot of our ecosystem is in danger and it’s really important for our students to be involved. Recognizing the turtle is one step in the right direction.”

Johnson, who has been teaching at Ventura High for the past eight years, teaches marine biology to 89 juniors and seniors who work with coastal marine bio labs. She noted they often “fall in love with the ocean here.” One of Johnson’s students who graduated last year has gone on to study marine biology at UC Santa Cruz — the same program as Pincetich.

“I developed a fun relationship with oceans living in Ventura,” Pincetich said. “I had a great time in the marine biology class at Ventura High and it became apparent that this ocean in our backyard is full of mysteries and we’re losing so many species faster than we can study them.”

© 2012 Ventura County Star. All rights reserved. This material may not be published, broadcast, rewritten or redistributed.