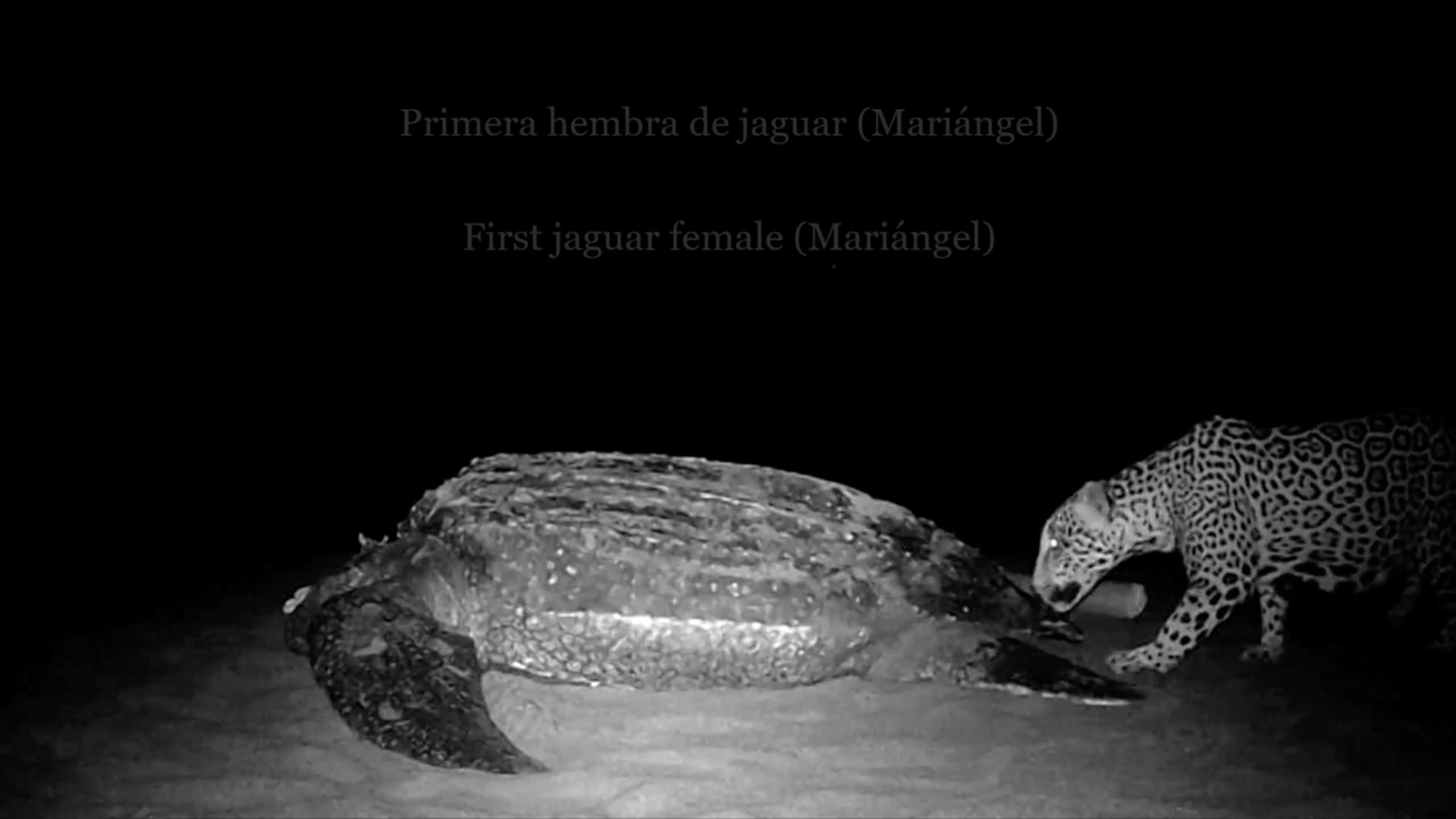 By Turtle Island Restoration NetworkApril 1, 2021May 5th, 2021News Releases, Save the Leatherback
No Comments

The camera trap that captured this video is one of 28 that have been installed in Santa Rosa National Park by biologist Luis Fonseca, who is leading a study on the interactions between the growing jaguar population and sea turtles on the beaches of Nancite and Naranjo with the support of nonprofits Turtle Island Restoration Network (TIRN) and Guanacaste Dry Forest Conservation Fund (GDFCF). The project also aims to increase the hatchling rate of Pacific leatherbacks on Naranjo, a secondary nesting beach located in the national park.

“This video is the first record of leatherback predation by jaguars in the Eastern Tropical Pacific,” said biologist Luis Fonseca. “Previously it was reported in the Caribbean Coast of Costa Rica and in Guyana. Sea turtles are easy prey for the jaguars, since they don’t have any defense mechanism that allows them to escape from the predator. Furthermore, the National Park has a high level of coastal marine ecosystem conservation, which has been consolidated in the last 50 years. This has undoubtedly contributed that the jaguar population has increased in recent years, therefore, the predation of sea turtles by this feline is becoming more frequent.”

Out of the seven populations of leatherback sea turtles, Pacific leatherbacks are the most at-risk for extinction. Researchers estimate that 90% of the nesting population has declined over the last three generations. To increase the hatching rate, eggs are relocated to a hatchery that provides shade and reduces the temperature of the sand. The sex of a sea turtle is determined by the temperature at which the egg is incubated, with higher temperatures producing more females. This nesting season, which runs from November to February, moving the nests to hatcheries more than doubled the survival rate of leatherback hatchlings from 20% to 50%. The Naranjo project documented seven total leatherback nests, becoming the third beach with more nests in Costa Rica after Cabuyal and Playa Grande.

“Although these jaguars preyed on a critically endangered sea turtle, this is a natural relationship and witnessing that this interaction can still happen helps protect both species,” said Mariano Castro of Turtle Island Restoration Network. “Saving Pacific leatherbacks is a race against time, and we need to make every possible effort to prevent them from extinction. This provides hope for these species, that is why we support this project.”

Pacific leatherbacks are the largest sea turtle and have one of the longest oceanic migrations of any animal on Earth. The species are on the verge of extinction in the Eastern Pacific primarily due to adults becoming tangled in nets or hooked on longlines in commercial fishing operations. Many groups are working to establish fully protected marine protected areas along their migration route, such as the Cocos-Galapagos Swimway.

Jaguars are the largest of big cat species in the Americas. Their populations have been declining due to habitat loss, poaching, and the loss of wild prey. However, in places like Santa Rosa National Park, researchers have shown a recovery in the population of these animals. Fonseca and his team (Coastal Jaguar Conservation and Guanacaste Dry Forest Conservation Fund) have witnessed this recovery, as in recent years they have seen an increase in jaguars on the beaches.

Playa Naranjo is located in Santa Rosa National Park, Guanacaste. This remote paradisiacal beach, famous among surfers, is within a five hour drive from San Jose, the capital of Costa Rica and can only be accessed by 4×4 vehicles.

Luis Fonseca is a Costa Rican biologist. He has been working in the beaches of Nancite, Naranjo and Bat Islands in Guanacaste for more than 15 years with GDFCF. Arribadas in Nancite (beach next to Naranjo) has been one of his main fields of research. His work has also led him to study the interactions between jaguars and sea turtles which has caught the attention of international television networks such as BBC and National Geographic.