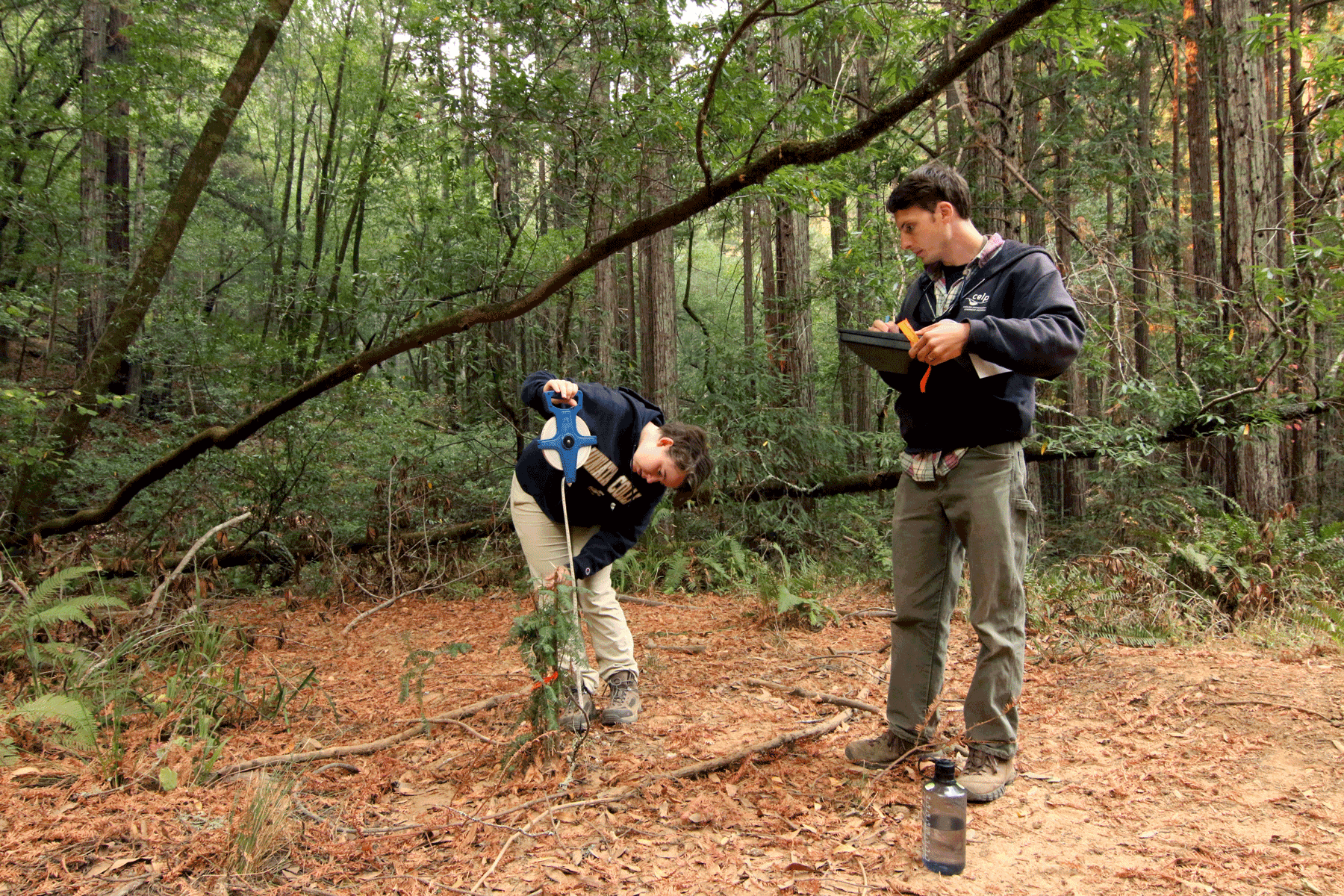 Due to logging and development a mere five percent of California’s original old-growth coast redwood trees remain. As a result, these magnificent trees are listed as “endangered” by the International Union for Conservation of Nature. The loss of coastal redwoods in California is not just a tragedy unto itself, it is impacting critically endangered coho salmon, other species, and even humans.

The 10,000 Redwoods Project is an initiative of Turtle Island Restoration Network to reverse this trajectory and concurrently sequester carbon. Our goal is to plant 10,000 redwoods in the San Francisco Bay Area to help fight climate change and stabilize salmon habitat. Since 2014, we have planted 180 redwood saplings.

It takes a lot of work to grow a baby redwood. When redwood seedlings are just one and two years old, they take frequent maintenance, watering, and feeding to mimic the natural conditions where they grow. We feed young seedlings once a month with seaweed food, to help add nutritious nutrients to their tissue. Once they’re three and four years old, we plant them in the wild and mulch, water, label and photograph each one.

One year after planting in the ground, redwood saplings are fed at least once a year with seaweed food and get water frequently throughout the summer. We measure them, take a photo, and label them again.

As trees get older, many years after planting them in the ground, we make sure all are labeled, photographed, occasionally watered and fed especially in drought, and kept on our maps and database with their location. 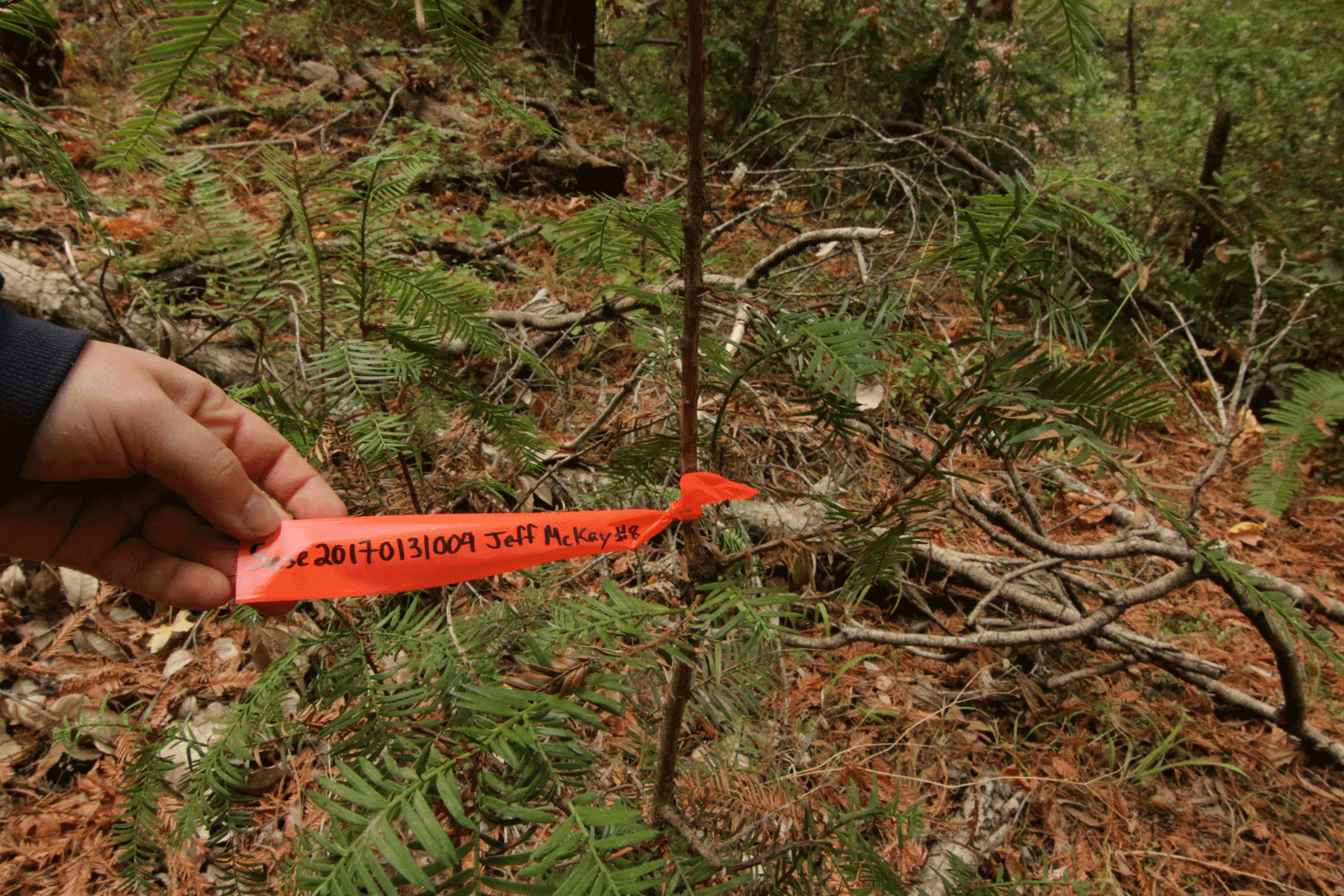 These redwoods are going to grow big and strong and help stabilize stream banks, slowing erosion and protecting the water that endangered salmon need to survive. Even though redwoods live on land, they need and rely on nutrients from the ocean. Salmon are surprisingly really good food for redwoods. They are anadromous – meaning they are born in freshwater rivers and streams and then migrate to saltwater before returning to freshwater to spawn. They go to sea to feed, because freshwater is nutrient poor compared to the abundance of the Pacific Ocean. When salmon return to the freshwater to spawn they die shortly afterwards, leaving their carcasses full of nutrients all across the creeks and waterways where animals, insects, and plants depend on their nutrients to act as rich fertilizer, annually deposited throughout the forest. The reason we feed our young redwood seedlings with seaweed food is to mimic the historic pulses of ocean nutrients that created abundance in the redwood forests. By planting redwoods and protecting salmon, we hope to restore the connections these species have to one another, linked together by a common relationship of giving and receiving, where both benefit and thrive.

We plant redwoods not just because they benefit endangered salmon but also since they are a symbol of climate action. While protecting habitat and wildlife, redwoods simultaneously pull in large amounts of carbon from the atmosphere. They store that carbon dioxide even after they have fallen to the forest floor. By planting thousands of redwoods, we hope to create a large “carbon sink” — a reservoir that stores carbon dioxide for centuries.

We have the opportunity to fight climate change in our backyard, and we are taking it. Currently, there are upwards of 1,400 redwood saplings growing in the Turtle Island Restoration Network plant nursery. With a lot of care and attention, these saplings will grow up to fight for endangered species and for humans.

To learn more about the 10,000 Redwoods Project visit our website, 10000redwoods.org. To get involved in the project to help us grow and plant thousands of trees, please contact Preston Brown, preston@tirn.net.