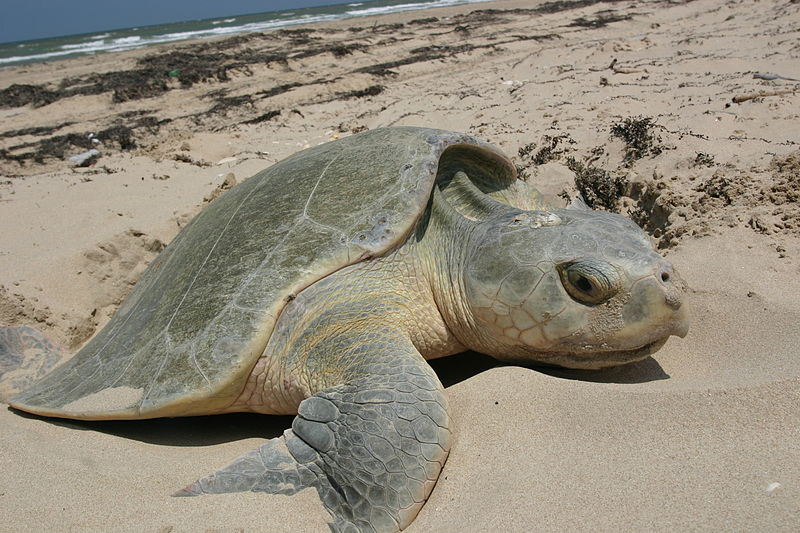 An olive ridley sea turtle surprised Tomales Bay beachgoers at Shell Beach in Inverness,CA, when it swam up to the shore, pulled itself out of the water and rested for approximately 30 minutes before re-entering the cold water and swimming away. The adult animal, approximately two feet long and probably weighing around 75 lbs., appeared to be exhausted and labored to haul itself completely out of the water, but otherwise appeared to be in good shape, according to witnesses.

This extremely unusual event was witnessed by about 10 people, including a staff biologist of Turtle Island Restoration Network, a sea turtle (and salmon) protection organization based in Forest Knolls, CA.

“My wife, eight month old daughter and I were sitting on the beach when we saw its head poke out of the water only 30 feet offshore” The turtle swam directly towards the family and then swam down the cove about fifteen feet and hauled out. “At first we thought it was a bat ray which are relatively common in the Bay.” Reuven Walder, Turtle Island watershed biologist said. “We called to a pair of swimmers who were in the water who were out in the cove when it first surfaced.” They stopped in amazement as both Walder’s family and the swimmers watched the turtle. “I assumed it came out of the water to warm up, as it was an unusually warm and sunny day,” said Walder.

Olive ridley sea turtles are normally found nesting thousands of miles south of here this time of year, with the largest nesting concentrations occurring in southern Mexico in the state of Oaxaca, and in Costa Rica. A few records of dead animals stranding along the Pacific coast have occurred in the past 40 years, including at least two in California, two in Oregon, one in Washington and three in Alaska.

“The animal is normally found in tropical and temperate warm waters, with its distribution normally bounded by the 20º isotherms,” said Todd Steiner, biologist and Director of Turtle Island. “What it was doing over 20 km from the Pacific Ocean inside Tomales Bay in 13º C water is surely a mystery, but it may be partly due to a northern shift of wamer waters caused by El Nino.”

What makes this turtle story even more remarkable are the large number of coincidences that all occurred at once (1) the animal was thousands of miles from its normal range in Tomales Bay; (2) the animal hauled out on a beach (which this species rarely does, except to nest) (3) it hauled out on a tiny beach which happened to have a biologist with a sea turtle organization present; and (4) that he had a camera available to record the event.NOTE: 25 photos available including swimming in Bay, hauling onto and leaving beach (w/& w/o people) (Photos taken by Reuven Walder)