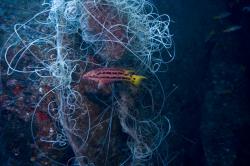 Every three months, the National Marine Fisheries Service releases figures on the previous quarters by-catch–species that are unintentionally caught in fishermens’ lines or nets.  The by-catch numbers are collected and tabulated from the records of on-board observers that document the by-catch of the fishing boats.  Last quarter, there were observers on 100% of the swordfish boats–a regulation that is the product of Sea Turtle Restoration Project’s 2001 lawsuit against the Hawaii swordfish fishery–but observers on only 33% of the tuna vessels.  The result are disturbing.

Hawaii’s longline fisheries have proven to be particularly deadly for vulnerable seabirds this year.  According to NMFS, 25 Black-footed Albatrosses were killed in the last three months between April 1–June 30, 2008. In the entire years of 2005, 2006, or 2007, only 12, 17, and 14 Black-footed Albatross, respectively, were killed in the deep-set longline fishery.  This troubling rise could not come a worse possible time since an endangered species listing is pending for the Black-Footed Albatross under the Endangered Species Act (in response to STRP’s 2003 petition).

The dramatic loss of marine life comes at a time when federal fishery managers plan to expand Hawaii’s longline fishery.  The Western Pacific Fishery Management Council has published plans to dramatically expand the swordfish fishery by eliminating limits on fishing effort and increase the allowed capture of loggerhead sea turtles from 17 to 46 loggerheads, an increase of 270%.  Their proposal would gut two key regulations designed to mitigate the impacts of the swordfish fishery when it was re-opened in 2001.

The Sea Turtle Restoration Project, the Center for Biological Diversity, and other groups are working together to make sure that the Hawaii longline fishery is not allowed to expand and increase it’s death toll on sea turtles, whales, dolphins, and sea birds.  We’ll let you know when and how you can speak up to oppose this destructive fishery!