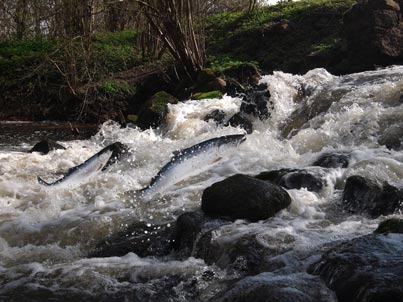 Seattle, WA — The Environmental Protection Agency today finalized an agreement to restore no-spray buffer zones around waterways to protect imperiled salmon and steelhead from five toxic pesticides. Turtle Island Restoration Network and a coalition of conservation organizations, advocates for alternatives to pesticides, and fishing groups cheered the victory.  These groups brought a lawsuit to demand reasonable fish protections from the insecticides, some of which are derived from nerve toxins developed during World War II.

“Keeping highly toxic pesticides out of our streams and rivers is a clear victory for families, coastal communities and salmon,” said Todd Steiner, executive director of Turtle Island Restoration Network (SeaTurtles.Org). “It is way more cost effective than trying to clean up the mess after the fact.” 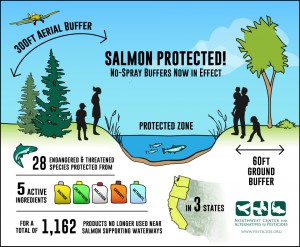 “We know our Northwest farmers and growers to be good land and water stewards. In reaching agreement, EPA will now give clearer direction to farmers on how to better protect fish, if and when they choose to use these chemicals near salmon-supporting streams,” said Kim Leval, Executive Director of the Northwest Center for Alternatives to Pesticides (NCAP), the lead plaintiff on the lawsuit that led to the settlement agreement. “We know, for example, that many fruit growers in the Columbia Basin have already implemented larger buffers with assistance from public and private funding sources. NCAP is committed to working in partnership with affected farmers to develop and implement alternatives to the five insecticides.”

“Poisoning salmon rivers puts our people out of work while creating an unnecessary and expensive public health hazard,” said Glen Spain of the Pacific Coast Federation of Fishermen’s Associations, a West Coast commercial fishing industry trade association and co-plaintiff. “This agreement helps the coastal and inland communities that depend on salmon for their livelihoods and provides more certainty for landowners on safer use of these chemicals.”

The buffers apply to salmon habitat throughout California, Oregon, and Washington to prohibit aerial spraying of broad-spectrum pesticides diazinon, chlorpyrifos, malathion, carbaryl, and methomyl within 300 feet of salmon habitat and prohibit ground-based applications within 60 feet. The agreement provides detailed notice to state regulators, pesticide applicators, farmers, and the public about the required no-spray buffer zones. These buffers will remain in place until the National Marine Fisheries Service completes analyses of the impacts of these five pesticides on the fish. Then, the EPA must implement permanent protections grounded in the Fisheries Service’s findings.

“Before this agreement, we lacked clear or consistent rules to protect the health of our rivers and salmon fisheries from these toxins,” said Steve Mashuda, an Earthjustice attorney representing coalition. “This clears the road for the EPA and the Fisheries Service to continue to work together toward permanent protections that keep pesticides out of our waters.”

These insecticides can harm salmon in a number of ways: by killing the fish directly, obliterating its habitat, impairing the species’ ability to swim, or interfering with its ability to navigate back to home streams to spawn. The pesticides also kill the insects salmon need to eat to survive.

“It’s kind of a no-brainer that salmon and pesticides don’t mix,” said Jason Rylander with Defenders of Wildlife. “Today’s agreement will go a long way towards ensuring that these highly toxic chemicals stay out rivers and streams and out of the food chain.”

“We have many areas of overlap in California between farming and imperiled salmon and steelhead runs, including many coastal river valleys, wine-growing regions, and the Central Valley,” said Lowell Ashbaugh of the Northern California Council of the Federation of Fly Fishers. “Many farmers in these areas are already engaged in fish-friendly practices, such as the Napa Green ‘best practices’ program for land-use and wine production that is protecting the Napa River. These new measures will ensure that all farmers keep poisonous chemicals out of sensitive rivers and streams – the most sensible and cost-effective way to ensure the health of our fisheries.”