For Immediate Release
Images available for media use here: https://www.dropbox.com/sh/c9c28s60uqic0ju/AADbu2LliOyX8llAUJN1sen7a?dl=0

Protesters Descend on Sen. Lara’s Headquarters in Support of Bill to Protect Dolphins & Whales from Driftnets

Sacramento (May 24, 2016) – Today, Turtle Island Restoration Network, a leading marine conservation organization, and Kurmalliance, a Southern California-based ocean activist organization, and Ocean Defenders Alliance, an Orange County based marine conservation organization, marched in front of Senator Ricardo Lara’s office in Long Beach, Calif. The purpose of the peaceful protest was to direct Sen. Lara’s attention to Senate Bill 1114, which would phase out the use of deadly driftnets and better protect marine wildlife. Sen. Lara chairs the Senate Appropriations Committee, which is expected to vote on the bill this week, and is in an influential position to protect California’s precious marine wildlife.

“We are all here today for one reason: to ask Sen. Lara to save California whales and dolphins from deadly driftnets by supporting Senate Bill 1114,” said Cassie Burdyshaw, the policy director at Turtle Island Restoration Network.

The protest began at 12:30 pm in front of Sen. Lara’s home base offices in Long Beach, Calif. Protesters dressed as sea turtles and marine wildlife costumes, and held handmade signs calling for the end of the driftnet fishery. Protesters communicated directly with Sen. Lara’s staff and explained the importance of this issue. Sen. Lara’s District Director signed a Turtle Island postcard in support of phasing out the deadly fishery. 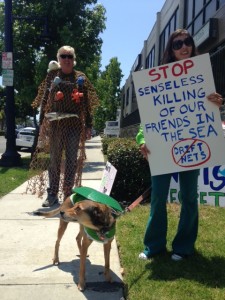 Support was visible from the Southern California community. Cars honked, and people walking by stopped to learn more about what they can do to help. The public can sign Turtle Island’s online petition at seaturtles.org/savedolphins, and call Sen. Lara at (916) 651-4033 to tell him to support Senate Bill 1114.

This protest follows on the heels of growing public pressure. Earlier this month, more than 30 environmental, ocean, conservation, and activist organizations representing over 1 million members signed on to a joint letter calling on California Senators and Assembly members to support SB 1114. An online petition supporting a transition away from the driftnet fishery is nearing 27,000 signatures. More than 250 scientists have also signed a public letter calling for the phase out of this destructive fishery.

BACKGROUND ON THE DRIFTNET FISHERY
The California drift gillnet fishery consists of fewer than 20 boats, and is among the worst 20 percent of all fisheries globally. The fishery kills more whales and dolphins as bycatch than all other fisheries on the West Coast combined. The California driftnet fishery sets mile-long invisible nets off the California coast to catch swordfish and thresher shark, but entangles anything that swims into them. It has been described as the most destructive fishery on the West Coast, incidentally killing more whales and dolphins than all other observed West Coast commercial fisheries combined, according to government figures.