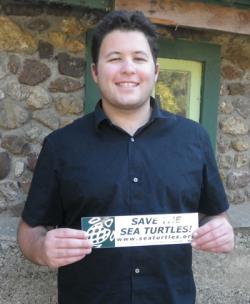 While interning at STRP this summer I acquired a great deal of knowledge concerning local and global issues that are vital to the preservation of sea turtles and endangered marine mammals. The vast array of duties I performed throughout my internship at STRP provided me with an invaluable professional experience that will without a doubt be tremendously useful in the future regardless of the career path I choose to take.

Prior to my internship at STRP I was unaware of the immense amount of issues that affect not only endangered sea turtles populations, but also our environment as a whole at a local, national, and global level. Being a lifelong resident of Northern California’s Bay Area, I had no idea about the drastic effect local fishing customs have had on the endangered Leatherback sea turtles in the Pacific, or the effect plastic bags and plastic bottle caps have had on this population as well. I must admit that prior to joining the staff at STRP this summer I did not concern myself with the conservation of endangered species or with environmental issues to a great extent. However, after spending just a few months at STRP I have become so much more aware and concerned with these issues, and I now know first-hand of the major impact that these issues have on my life as well.

Some of the more significant duties I performed over the course of my internship at STRP include: legal research of various legislative acts created by the United States congress, including the Marine Mammal Protection Act and the Endangered Species Act; supporting legal action against long-line fishing activity which has an extremely drastic effect on sea turtle populations; creating a list of thousands of established scientists in fields related to marine biology in efforts to attain global scholarly support of STRP’s efforts to protect endangered Leatherback turtles in Costa Rica; and drafting several memorandum dealing with major issues regarding endangered sea turtles to a quite diverse collection of recipients, ranging from the head of Unified Command in charge of the overall BP Gulf oil spill clean-up effort, to Miley Cyrus, who prominently featured Kemp’s Ridley sea turtles in one of her recent films.

The most significant experience of my internship, however, was being at STRP’s headquarters while the plight of endangered Gulf sea turtles, mainly the endangered Kemp’s Ridley sea turtle, came to the forefront of global media attention. Being the preeminent authority on sea turtle conservation, STRP was flooded with non-stop media requests from major media outlets across the globe. Listening in on several interviews dealing with the effect the BP Gulf oil spill has had on sea turtles in the Gulf region, then seeing that interview online or printed in a magazine or newspaper not long after was quite a unique experience to have. I even got to be on the local evening news!

Throughout the summer, one of the more crucial roles I had in regards to the BP Gulf oil spill was managing several blogs on respected websites, which provided detailed accounts of my supervisor, Dr. Chris Pincetich. On his initial trip to the Gulf region of the United States he led an endeavor to convey to the those concerned a legitimate account of efforts to save endangered Gulf Sea turtles, the overall BP oil spill clean-up effort, and the effect the spill has had on Gulf communities. On our CNN ireport alone we had over a thousand people view our photos that Chris had taken while flying over the Gulf of Mexico. These photos provided firsthand accounts of the Deepwater Horizon platform, where the spill actually occurred, in addition to a bird’s eye view of the extent that the oil had spread over the Gulf. I also had the duty of drafting a memorandum to Unified Command, designated as the key party involved in the BP Gulf oil spill clean-up effort, outlining certain legislative acts established by the United States Congress that all parties must abide by regarding the protection of local endangered species sea turtle populations.

The overall experience I had at the Sea Turtle Restoration Project widely exceeded my expectations. Each day was different than the day before, and every single one of these days I spent at STRP I learned something new. To anyone who wants to make a positive impact on the world they live in, as well as on their own life, regardless of the career path they choose to take, I sincerely suggest being an intern, or volunteering for a day or weekend at an event, or donating to the Sea Turtle Restoration Project.