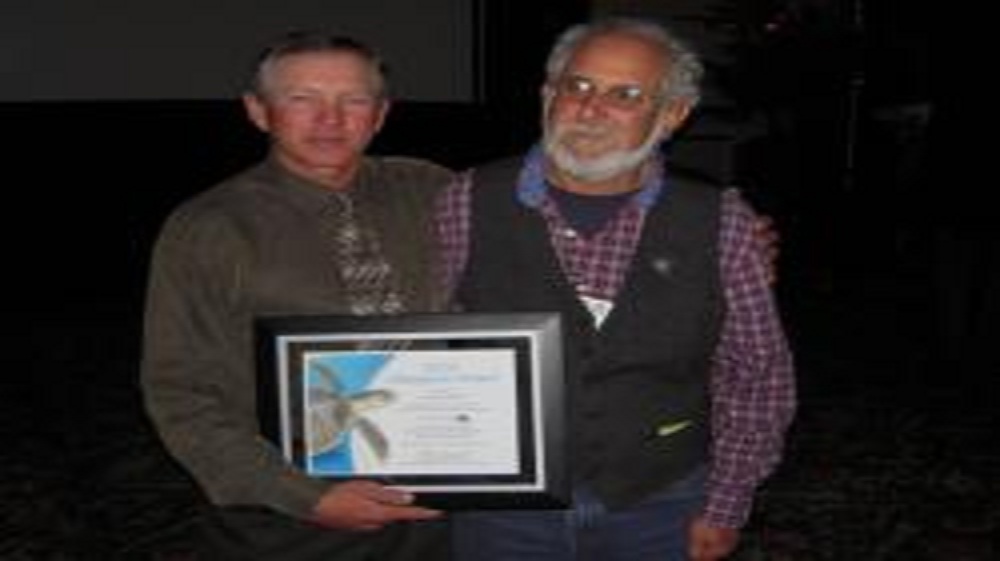 Scientists Recognize Shrimper for Saving Turtles from Drowning in Nets

Sea turtle biologists from around the world have recognized the late Georgia shrimper Sinkey Boone as a conservation champion for inventing the fishing device that now allows sea turtles to escape from trawl nets around the world, known as the Turtle Excluder Device (TED). Family members accepted the Sea Turtle Champion award given by the International Sea Turtle Society at its annual meeting last week.
“Sinkey always said we should protect all sea creatures when we fish,” said Howell Boone, Sinkey’s son and a second-generation shrimper based in Darien, Georgia, who received the sea turtle award along with his wife Bertha Boone and son, Bryan Boone (Sinkey’s grandson). “Even now we think the opening in the shrimp trawl nets should be larger to allow big leatherback turtles to escape while still catching the best shrimp.”
“Sinkey Boone saved the lives of sea turtles and brought the sea turtle and shrimp fishing communities together,” said Todd Steiner biologist and Executive Director of Turtle Island Restoration Network (TIRN) in California. “His accomplishments were monumental and that is why I nominated him for this award.”
Steiner presented a scientific poster on Sinkey’s accomplishments at the International Symposium on Sea Turtle Biology and Conservation, held April 11 to 16 in San Diego. Download the poster. About 1,000 sea turtle scientists, conservationists and marine specialists attended the symposium where the award was given. The International Sea Turtle Society brings people together to promote the exchange of information that advances the global knowledge of sea turtle biology and conservation.
The Turtle Excluder Device is required on all domestic shrimp trawl boats and on overseas fleets that sell wild shrimp into the U.S. Sinkey invented the original Georgia Jumper, which was popular with shrimp fishers because it was an alternative to the government created big, clumsy boxy-type TED that shrimpers called dangerous and unworkable. The invention of and eventual required use of TEDs by shrimp trawlers has been recognized as saving the lives of thousands or even millions of sea turtles that are in danger of extinction around the world.
In the 1990s, the Sea Turtle Restoration Project (STRP) of TIRN enlisted Sinkey’s help to train fishery technicians and sea turtle biologists in the use of TEDs, first by bringing people from Mexico and Costa Rica to work with him in Darien, and later by helping Sinkey travel to these countries to meet with fishers there.
While Sinkey had an economic interest in promoting his device, his concern for sea turtles, the shrimping community and the oceans themselves were his strongest motivation. He opened his home, his boat and his heart to promote understanding between environmentalists, shrimpers and the public.