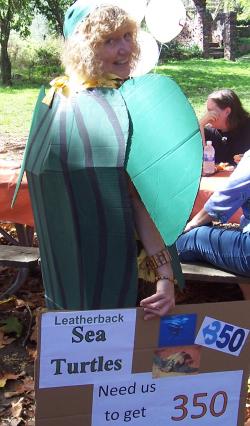 On 24 October, people in 181 countries came together for the most widespread day of environmental action in the planet’s history. At over 5200 events around the world, people gathered to call for strong action and bold leadership on the climate crisis.

Sea Turtle Restoration Project members and staff joined the call to reverse climate change to protect sea turtles. Sea turtles will lose nesting beaches and could go extinct if sands get so hot that only female hatchlings are born. Barbara George (see photo) joined the rally in San Rafael, CA, where she donned a home-made sea turtle costume that got the attention of the press.

“I am seriously affected by climate change as a sea turtle,” said George, 58, who wore a cardboard suit painted green and cut in the shape of a sea turtle. “With sea water rising, it could affect my nests.”

STRP is putting out the call for sea turtles to rally at the Climate Change talks in December in Copenhagen! Learn how to make your own. Real sea turtles would be cold-stunned if they swam to Denmark, but if global warming continues sea turtles could end up on these wintry beaches!

Read more about international plans for mobilizing for the Climate Change Talks at www.350.org.