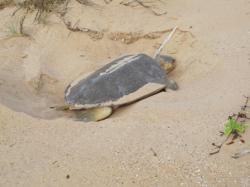 fter the big turtle wrangling night, sea turtle activity on EcoBeach slowed for a few nights. Turtle-time took over as we all got into the rhythm of beach walking by night, sleeping for a few hours at a time, eating and resting. The heat and humidity kept non-patroling activity to a low ebb. What day is it?

On one slow night on the beach, an elusive sea turtle seemed to intentionally avoid the patrols. We crossed her tracks once at the beginning of a midnight patrol as she attempted to nest (a false crawl). Then a short time later, the earlier patrol passed us on their return to the resort and called to report they had sighted a second set of tracks just behind us, but no turtle. The turtle must have crawled up again just minutes after our crew had passed. Then at 2:45 am as we were headed back after an uneventful patrol, we found a third set of tracks not far from the first two leading to, finally, a nest, but again no turtle. If it was the same sea turtle, and we don’t know for sure, it appears she intentionally eluded the research team. Sea turtles can see, hear and smell us and our figures on the beach could make a nesting female wary.

On the second morning that my patrol returned from a night camping at Jack’s Creek, we exhumed another nest and found a hatchling still struggling in the nest after all its mates had gone. Once again we were able to release the little flatback into the sea and hope it had enough strength to swim beyond the low waves.

Finally on our last night, we got busy with turtles again. This night we needed to take an extra step by clipping a tiny piece of flipper to fulfill a special request for flatback DNA by the U.S. Fish and Wildlife Service. The CVA project here at EcoBeach managed by Glenn McFarlane is the only project in Australia where flatback DNA sampling is being conducted in 2010. So after I helped get flipper tag numbers, measure the sea turtle, and mark her nest, I assisted Tony in preparing the rear flipper for a quick clip of the flipper to put in a vile. Then we needed to break normal beach protocols and take a picture of the sea turtle with the DNA sample to document the sample for Uncle Sam. This is the only picture of me with a sea turtle for the week — my hand holding the DNA sample!

Earlier that same night, the Jack’s Creek patrol was lucky enough to see a daylight nests on their way out to camp. One of the Shell volunteers was generous enough to share his fantastic photos, which you see above. So far flatbacks have laid more than 60 nests! Next week, the CVA sea turtle tagging and monitoring team will be leaving the beach for the season and the first CVA EcoBeach hatchling program will begin to monitor the hatchlings as they emerge from the nests.