We are thrilled to report that our efforts to gain greater global protections for sharks and rays have paid off!

Thanks to your help and support we were able to deliver over 15,000 petitions to Presidents of Costa Rica,  El Salvador, Guatemala, and Nicaragua. These thousands of petitions, signed by citizens from around the world, called on leaders to support protections for silky sharks.

Many of you helped us get more petition signatures by sharing and re-tweeting posts, and forwarding emails. Thank you! 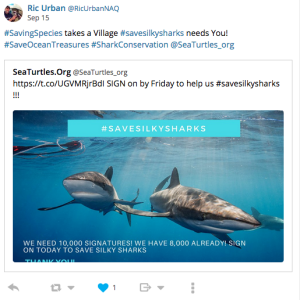 Specifically, Turtle Island asked nations to support greater protections for silky sharks by listing them under Appendix II of CITES.  The Convention on the International Trade in Endangered Species of Wild Fauna and Flora (CITES) is an international agreement between governments. Its aim is to ensure that international trade in specimens of wild animals, and plants does not threaten their survival. Listing a species on provides it with special protections globally.

Turtle Island was also able to attend the CITES meeting in South Africa and meet with leaders, and fellow shark and ray conservationists.  While there, we learned that Canada was planning to vote against shark protections. Again, we were able to mobilize our Turtle Island members, and send more than 3,000 emails in a day to the Prime Minister of Canada.

Yesterday, Monday, October 3rd we watched as silky sharks, thresher sharks and rays were voted in to be listed in Appendix II of CITES, and gained greater global protections. This is a major victory for sharks and rays!!! 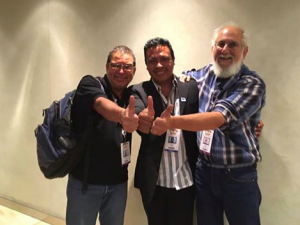