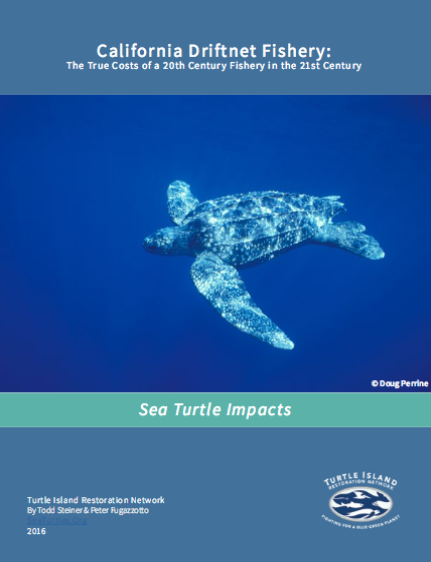 By Turtle Island Restoration NetworkApril 5, 2016Got Mercury?, Resources for the Media, Sea Turtles
No Comments 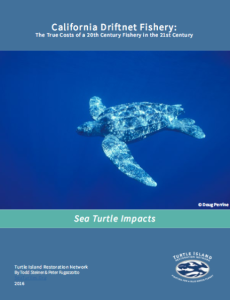 Olema, Calif. (April 5, 2016) – Turtle Island Restoration Network’s new report ‘California Driftnet Fishery: The True Costs of a 20th Century Fishery in the 21st Century – Sea Turtle Impacts’ outlines how the California driftnet fishery for swordfish is among the most harmful fisheries in the U.S. to endangered sea turtles. The just-released-report examines new data that shows the driftnet fishery is a threat to loggerhead and leatherback sea turtle populations. The California driftnet fishery could push the Pacific leatherback sea turtle population, of which only 1,400 exist, to the brink of extinction.

“California’s driftnet fishery threatens to wipe out California’s state marine reptile, the beloved leatherback sea turtle. This fishery has killed more than a hundred of these critically endangered sea turtles in the past two decades, it must be stopped,” said Todd Steiner, biologist and executive director of Turtle Island Restoration Network (SeaTurtles.Org), which has worked for over two and a half decades to reduce wildlife deaths in this and other fisheries.

The driftnet fishery in California consists of roughly 20 fishing vessels. The vessels set out nets the size of the Golden Gate Bridge to float overnight and indiscriminately catch whatever swims into their nets.

Endangered sea turtles are air-breathing animals, and when they become entangled in the nearly invisible monofilament line of mile-wide driftnets, they drown when they are unable to surface to breathe. Even if sea turtles escape entanglement, they can die after being forcibly submerged. Between 1990 and 2000, the California driftnet fishery killed an estimated 137 sea turtles.

“Despite the fact that Pacific leatherback sea turtles are the largest sea turtles on the planet, they are no match for the driftnet fishery. This deadly fishery has been operating at too high of a cost to marine wildlife, our economy and our health for far too long. It is time to shut down the driftnet fishery once and for all,” said Peter Fugazzotto of Turtle Island.

Turtle Island is the sponsor of a new bill authored by Senator Ben Allen (D-Santa Monica) designed to protect California’s marine wildlife by ending the use of deadly driftnets in California. The legislation, Senate Bill (SB) 1114, will protect sea turtles, whales, dolphin and marine wildlife by transitioning California’s swordfish industry away from driftnets to more sustainable fishing technology. The bill will be in front of the Senate Committee on Natural Resources and Water in early April. Turtle Island is asking California citizens to contact their representatives and ask them to support SB 1114.

“This timely report calls for the phase out of the California driftnet fishery which poses unacceptably grave risks to many sea turtles, and provides critical information to lawmakers to act in support of Sen. Ben Allen’s bill to phase out the driftnet fishery,” said Doug Karpa, legal program and science policy director at Turtle Island.

The ‘Sea Turtle Impacts’ report is the second in a series of reports examining the deadly impact of this fishery. It follows, ‘California Driftnet Fishery: The True Costs of a 20th Century Fishery in the 21st Century – Driftnet Overview.’

Background of the California Driftnet Fishery:
The California driftnet fishery kills or injures approximately seven times more whales and dolphins than all other observed fisheries in California, Oregon, Washington, and Alaska combined, and 13 times more than any other single observed fishery on the West Coast. The fishery has killed an estimated 16 endangered sperm whales in the last decade. Recent stock assessments suggest that this take is more than the population can sustain from all sources combined, much less from a single fishery. In total, an estimated 885 marine mammals have been killed in the past decade alone. Driftnets are already banned by the United Nations, on the high seas, by a host of countries, and throughout the United States. Turtle Island’s new report shows that it is time for California to phase out this outdated and ineffective method.