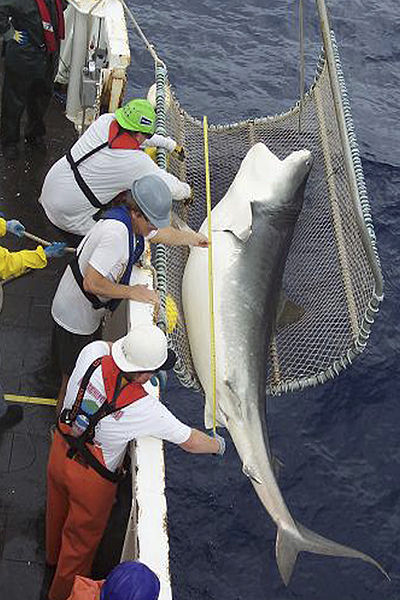 Joined by World’s Most Prestigious Scientific and Conservation Organizations
On October 24, 2003, more than 60 Costa Rican biologists from important academic institutions, such as the University of Costa Rica, the National University, the Universidad Latina, and even the Union of Biologists, called on the Costa Rican Minister of the Environment for the nullification of a new INCOPESCA shark fin regulation. Prestigious international scientific and conservation organizations, such as the The Shark Research Institute, The Shark Trust, The IUCN Shark Specialist Group, Wild Aid, The David Shepherd Wildlife Foundation and the International Fund for Animal Welfare support the call of the Costa Rican biologists.

The new INCOPESCA regulation would cancel a 2001 regulation which had banned the landing of shark fins at Costa Rican ports, and mandated that all shark carcasses must be landed with fins attached. The 2001 regulation was praised around the world for its compliance with the UN FAO Code of Conduct of Responsible Fisheries, which condemns shark finning. The new regulation, on the other hand, would allow vessels to land unattached shark fins and has received strong domestic and international opposition. A key component of the new regulation includes a complicated plan to use biologists from Costa Rica’s Union of Biologists to supervise the landings of shark products by international longline vessels, and collect shark biological data. Due to the extreme difficulties of determining species of landed finless shark carcasses and unattached shark fins, the new regulation would make the biologist work virtually impossible, and thus, biologists themselves are opposing the plan. The new regulation is scheduled to take effect on November 3, 2003.

“The general idea of using biologists is excellent, but if you are going to use biologists to collect shark biology data, shark carcasses must be landed with fins attached,” said Randall Arauz, Director of PRETOMA. “Shark experts worldwide and the UN FAO confirm that collecting biological data of finless shark carcasses is a virtually impossible task. If we are going to include biologists we must facilitate their work, not frustrate it. Sticking to the 2001 regulation and demanding fins attached, would aid biologists and thus simply makes more sense.”

“We fail to see the logic in the new regulation, and are concerned because its passage came as a surprise, before public comments were completed,” said Irene Boza, biologist at PRETOMA. “Furthermore, for weeks we have been asking INCOPESCA for the two-week biological study they did when creating the new regulation, but we still haven’t seen it.”

“The only support for this new regulation is coming from INCOPESCA, and INCOPESCA’s support appears to be a capitulation to Taiwanese and other international fishing companies who would benefit enormously from greater possibilities for finning and landing shark fins here,” said Arauz. “We are calling for a complete return to the 2001 regulation, and we would give our full support for using biologists to augment that regulation. If your objective is to protect sharks and collect data for responsible management of shark resources, the old regulation plus biologists is a perfect combination.”