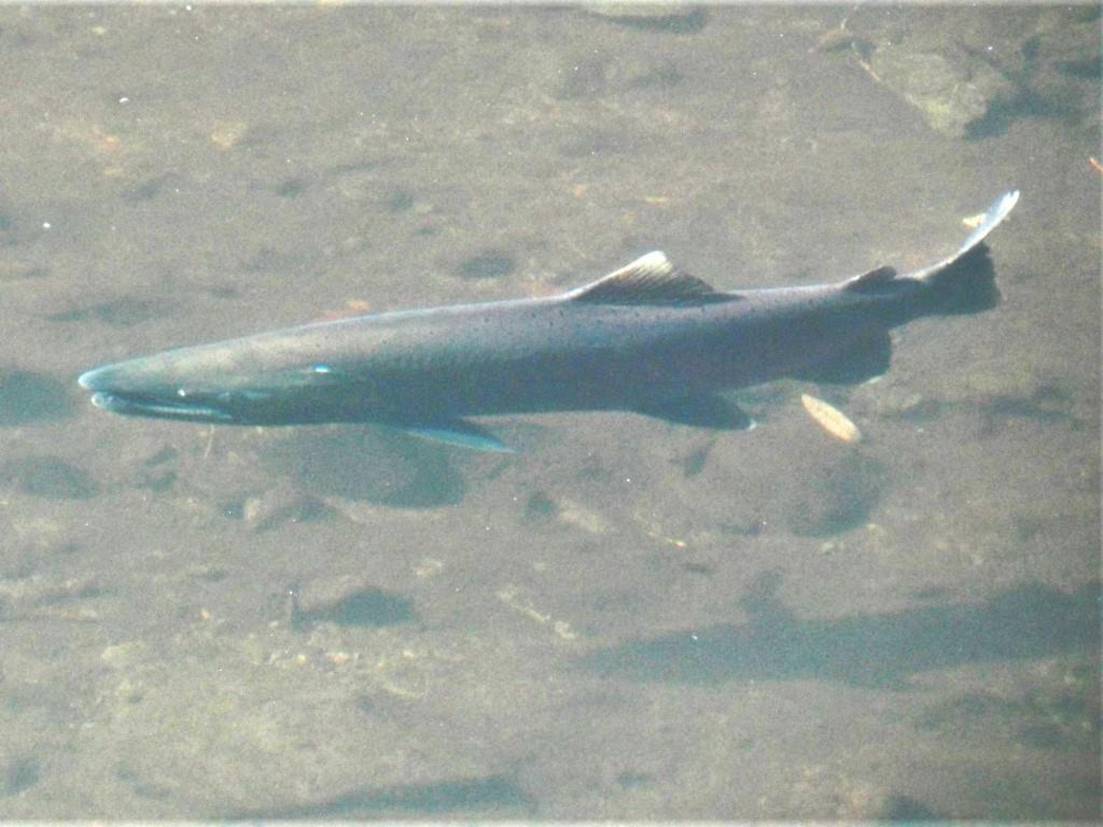 Where to See Salmon Spawn in Marin County, California

Despite being listed as critically endangered under the U.S. Endangered Species Act, coho salmon and steelhead trout are still found in Marin County, California. The largest run of coho salmon in the Central California Coast are found in Lagunitas Creek. Salmon and steelhead spawn (build nests) in Lagunitas Creek, San Geronimo Creek, Olema Creek, and several other tributaries.

Coho salmon are an anadromous species, meaning they migrate from the ocean to their freshwater natal streams to spawn, or build nests (called redds). Salmon spend two to seven years in the ocean before returning to the freshwater streams and rivers where they first emerged as fry to build redds in an area of coarse gravel. As a female discharges her eggs into the redd, a male fertilizes them. All coho die after spawning—the dead and dying fish are a valuable source of nutrients for plants, insects, birds and mammals, and are a vital component to the structure of this fascinating ecosystem.

When to See Spawning Salmon and Steelhead

Coho are typically sighted from November to February, with spawning normally peaking in December and January in the Lagunitas Creek Watershed. Steelhead trout spawn later, usually between January through March.

Coho salmon and steelhead enter the freshwater streams through Tomales Bay after the first heavy rains of autumn allow enough water to pass over riffles and waterfalls. They also spawn in Redwood Creek (Muir Woods), entering directly from the Pacific Ocean.

Where to See Spawning Salmon and Steelhead

Fish can be seen spawning in the creek directly below the parking lot and at several locations upstream as you walk along the fire road (about .5 miles in length) towards Peter’s Dam (Kent Lake). The dam spillway is the end of the road, blocking further migration for coho and steelhead. Shafter Bridge (on Sir Francis Drake Blvd., which crosses over Lagunitas Creek) is at the confluence of Lagunitas Creek and San Geronimo Creek. Fish can also be observed from Shafter Bridge jumping at the Inkwells, a series of natural small waterfalls in San Geronimo Creek. Please use caution when crossing this busy road!

Directions: Head west on Sir Francis Drake Blvd. (approximately 8 miles west of Fairfax). After passing through the town of Lagunitas, the second light-green colored metal bridge is Shafter Bridge. The parking lot of the Salmon Viewing Area is open to the public. If heading west, it is a left-hand turn into the parking lot immediately after the bridge. Please make sure that you park in legally-designated areas. There is no parking fee but parking is limited to one hour.

Spawning fish can be observed by walking along the creek in the picnic ground and campground. One spawning site often used by fish is directly behind the headquarters building at the entrance. Other popular areas are at the vehicle bridge over the creek behind the bathrooms. The south creek and north creek trails are single-path dirt trails that offer good viewing. Pick up a park brochure from the kiosk to help orient you to the park.

Directions: Head west on Sir Francis Drake Boulevard (approximately 9 miles west of Fairfax) and the main entrance/campground is on the left (south). There is an entrance fee for driving into the Park.

This site is an excellent place to see migrating coho salmon and steelhead trout after several long, steady rains. Since this is a recent restoration site (SPAWN completed the project in summer 2020 to remove a dam and major fish passage barrier so fish can swim through the new habitat structures) and the ground is healing from the construction, the area is wrapped in a chain link fence. However, fish can be seen from the bridge over the creek on San Geronimo Valley Drive.

Directions: Head west on Sir Francis Drake Boulevard (approximately 5 miles west of Fairfax). Turn left (south) at Nicasio Valley Road (first turn after entrance to SG Valley Golf Course entrance) and proceed one block to the end of the road. Turn left (east) onto San Geronimo Valley Drive and park along the road. The pools lie just beyond the chain link fence and can be viewed from the bridge. Please be careful and vigilant of automobile traffic!

Spawning coho can be seen here each year.

How to Identify Salmon and Steelhead

Spawning coho salmon are seen much more commonly than spawning steelhead because they stay and guard their nesting sites until they die, sometimes for a week or longer. Steelhead spawn quickly and leave (some return to the ocean and come back to spawn in subsequent years).

Adult coho in the Lagunitas Creek Watershed are approximately 24 inches long. They enter Tomales and begin the incredible metamorphosis of changing color and shape as they prepare to journey upstream. Males turn bright red and grow a hooked jaw, called a kype. Females are dark red without the hooked jaw. The female’s tail (caudal fin) often looks white, as scales are scraped off during nest digging and fungus begins to grow as their bodies decompose. The dorsal fin along the backbone ridge of males also turns white. Jacks are small males (usually less than half the size of adults) that are sexually mature. Jacks are dark red or brown and return after only six months at sea (compared to nearly 18 months at sea for other adults). 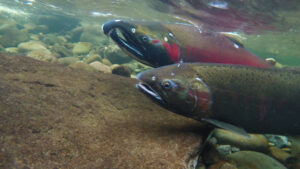 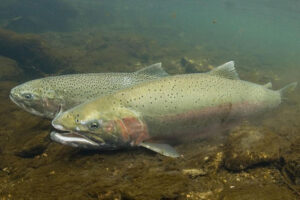 Steelhead trout look similar to coho in that they, too, are large adult fish. Their color is lighter, often pink and olive with a bright pink lateral line along the side of their bodies. Steelhead spawn in late winter and only overlap with the last of the season’s spawning coho. Historically, 5,000 to 10,000 coho and steelhead returned to spawn in the Lagunitas Creek Watershed annually. Today, only an average of 500 return to spawn. Please be respectful while searching for spawning activity and do not further jeopardize their existence or the viewing pleasure of others.

Coho salmon and steelhead trout are classified as endangered species under the U.S. Endangered Species Act. It is illegal to capture, harm, harass or disturb these species. We encourage you to enjoy viewing the spawning fish without jeopardizing their existence. Be calm and quiet on the banks of the creek, do not approach the creek or attempt to get in the water.

Stay out of the water and on the trails. Stepping on a salmon nest (called a redd) can destroy the thousands of eggs that are buried in gravel beds located in the stream.

Please don’t disturb fish! Binoculars are a great way to get a closer look without disturbing them. Don’t approach so close that you cause them to head for cover. Don’t throw objects in the water.

Keep sediment out of the stream. Don’t do anything that will cause silt to get into the streams. Silt clogs spaces between gravel nests and robs the eggs of needed oxygen. By staying on trails and not blazing your own path, you prevent erosion and siltation.

Don’t pick or break any native plants. Plants provide cover and shade for fish and are a food source for insects that fish eat.

Keep children under parental view to ensure that their actions don’t harass or harm fish, this includes throwing rocks into the stream, which is always tempting for young children.

Keep dogs and horses out of the stream. Please leave pets at home.

The Salmon Protection And Watershed Network (SPAWN) is a program of the global ocean conservation nonprofit Turtle Island Restoration Network. SPAWN protects endangered, wild coho salmon and the forests and watersheds they need to survive in Marin County, California. Our work is supported by thousands of individuals who join our network and make tax-deductible contributions. Please join us! 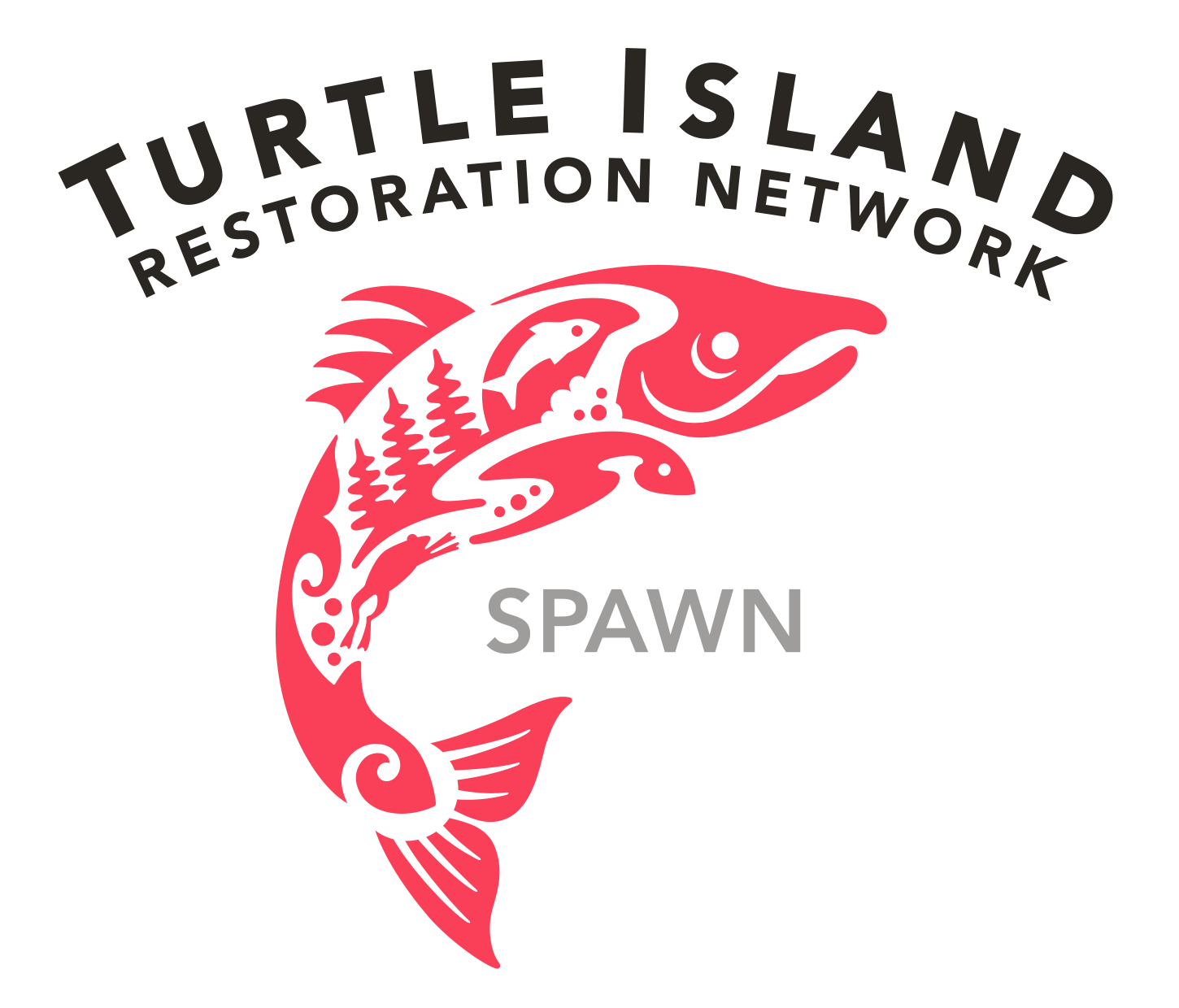