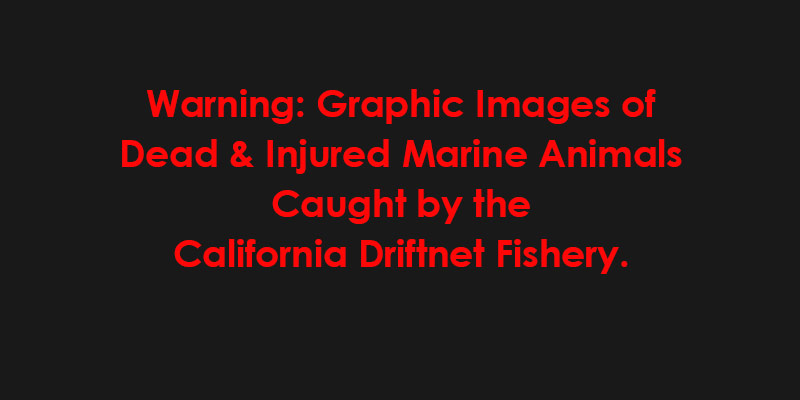 The photos were obtained through a legal petition with the National Marine Fisheries Service, the agency responsible for the protection of these protected species, who places required observers onboard a small percentage of vessels in order to document the carnage.

The California driftnet fishery sets mile-long invisible nets off the California coast to catch swordfish and thresher shark, but entangles anything that swims into them. It has been described as the most destructive fishery on the West Coast, incidentally killing more whales and dolphins than all other observed West Coast commercial fisheries combined, according to government figures.

“Statistics aside, these images of bloody dolphins and mutilated sharks and turtles capture the true cost of this barbaric fishery,” said Todd Steiner, biologist and executive director of Turtle Island Restoration Network.

Though a Freedom of Information Act (FOIA) request, Turtle Island Restoration Network obtained the photos from the National Marine Fisheries Service, which is required to place a small percentage of observers on vessels in order to estimate the number of protected species being harmed by this fishery. The images are from the period 1997 to present.

The California driftnet fishery consists of fewer than 20 vessels, and costs taxpayers more money to manage, than the value of target species of fish caught.

“I can only imagine the suffering these air-breathing mammals endured as they became ensnared in these nets and could not surface to breathe. Because they swim in family groups, mothers and siblings probably witnessed the slow drowning of their kin. This barbarity must end,” said Cassie Burdyshaw, Turtle Island’s driftnet campaign director. “We are now looking to legislators to take action and protect our ocean wildlife and end this carnage once and for all,” she added.