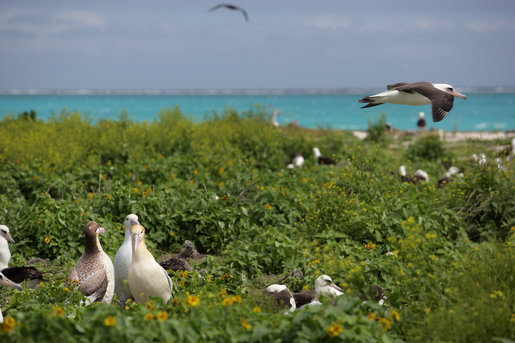 Supporting the Expansion of the Papahānaumokuākea Marine National Monument

Turtle Island wrote a letter to President Obama to support the expansion of the Papahānaumokuākea Marine National Monument. Below is the letter we sent.

I am writing on behalf of Turtle Island Restoration Network to support the expansion of the Papahānaumokuākea Marine National Monument (PMNM). Please approve the Native Hawaiian proposal to expand the boundaries to the full 200 nautical mile limit of the Northwestern Hawaiian Islands’ exclusive economic zone (EEZ) – excluding the waters around of Ni‘ihau and Kaua‘i. This action would protect one of the most unique ocean ecosystems on the planet.

Turtle Island Restoration Network is a leading voice for the protection of marine wildlife and their ocean and coastal habitats. With more than 250,000 supporters, volunteers, and activists, we strongly advocate on behalf of sea turtles, whales, dolphins, sharks, and countless other marine species. We have been especially active in protecting the leatherback and green sea turtles that inhabit the waters near the Hawaiian islands and reducing harmful industrial fishing activities that impact all marine species.

Expanding the area of protection of the PMNM would leave a significant environmental legacy for future generations. The area is critical foraging habitat for 22 species of seabirds, 22 species of whales, more than one dozen species of sharks, 4 commercially important species of tuna, 5 species of threatened sea turtles, and endangered Hawaiian monk seals. Habitats that will gain protections with an expansion include offshore pelagic (open water) areas, seamounts, submerged reefs, sunken islands, and banks.

President Obama, please take this incredible opportunity to secure this legacy of ocean stewardship and protect our natural, cultural, and historic resources.