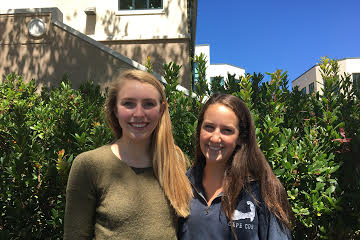 By Turtle Island Restoration NetworkOctober 3, 201610,000 Redwoods, Resources for the Media
No Comments

Olema, Calif. (October 3, 2016) – Marin Academy High School Students Alex Paff and Katie Joyce volunteered with the Salmon Protection And Watershed Network (SPAWN), and became passionate about the 10,000 Redwoods Project, which aims to plant 10,000 redwoods in the greater San Francisco Bay Area to help fight climate change. Together the two dedicated volunteers were able to raise a total of $1,600, as well as valuable supplies, like shade cloth, to help grow redwood trees.

“We were originally drawn to the redwood project because it was something that we knew would directly impact our community,” explained Paff, who was introduced to SPAWN through her Biology Teacher Liz Gottlieb.

Another draw to Joyce was that the project incorporated an education component. The 10,000 Redwoods Project allows teachers and students in the Bay Area to grow redwood seeds and saplings in their classrooms by means of propagation benches donated by SPAWN.  The hands on opportunity of growing redwoods trees will play a valuable part in teaching students about the role of redwoods in our local ecosystem.

“The fact that the project directly educates students about redwood trees. These trees sequester more carbon than any other tree on this Earth. The fact that people and businesses were able to donate to something that helps future generations learn about it was really powerful,” said Joyce.

Together Joyce and Paff decided to support the 10,000 Redwoods Project by spearheading a letter writing fundraising campaign. They began writing letters to local and national businesses, asking them to support the project. Once they sent the letters out, the two waited eagerly for a reply. But not one single business replied. So they decided to change tactics and call the businesses directly.

“I think that the biggest challenge was sending out emails and letters to companies and not receiving responses as quickly as we had hoped,” said Alex. “Fortunately, after calling these companies directly, we were able to make personal connections with business owners who were willing to help donate to our cause. It was a great moment for us when we started to see something come out of our hard work,” said Paff.

Together, Katie and Alex raised a total of $1,600 and were able to get valuable supplies like shade cloth donated to the 10,000 Redwoods Project.  The next steps will be getting redwood tree propagation benches outfitted with irrigation and shade cloth and getting them into Bay Area classrooms.