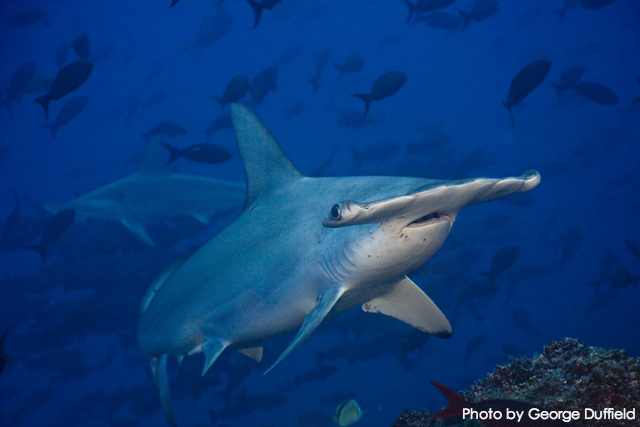 The Future of the World Heritage Convention for Marine Conservation highlights Turtle Island’s work Tracking shark and other migratory species among UNESCO World Heritage Sites in the Eastern Tropical Pacific.

Olema, Calif. (Dec. 20, 2016) – Turtle Island Restoration Network, a leading ocean and marine conservation organization, is featured in the United Nation’s newest publication The Future of the World Heritage Convention for Marine Conservation, for their work tracking migrating marine wildlife like hammerhead sharks and green sea turtles in the Eastern Tropical Pacific. Turtle Island is the primary author of the article, and the organizations scientific findings have showed how the Eastern Tropical Pacific is a region is more connected than previously thought.

“Turtle Island is honored to be in the United Nation’s magazine for our work tracking and protecting sharks, sea turtles, and marine species in the Eastern Tropical Pacific,” said Todd Steiner, the executive director of Turtle Island. “We will continue to better understand these species, so that we can use the best available science to ensure they are protected,” he added.

Executive Director and Founder of Turtle Island, and Biologist Todd Steiner has long led research scuba diving expeditions to UNESCO World Heritage Site Cocos Island National Park in Costa Rica. The remote island sits some 350 miles off the coast of Costa Rica, and is teaming with rate and endangered marine wildlife, which gives researchers and volunteer divers a chance to place tracking tags on sharks and sea turtles. Then Turtle Island researchers track the movements of the marine wildlife in order to better understand where the animals swim, how to effectively protect them during their migrations, and the overall connectivity of the Island in the Eastern Tropical Pacific.

“Cocos Island and the entire Eastern Tropical Pacific is a wild and beautiful jewel of our world’s oceans that deserves to be studied and protected,” said Joanna McWilliams, the lead author of the article and the communications director for Turtle Island. “I’m personally thankful that the United Nations is choosing to highlight it, and the collaborative spirit of the scientists working in the region.”

Turtle Island is a member of Migramar Network, which is made up of researchers from diverse groups, such as universities, government agencies and non-profit organizations including Equilibrio Azul, Universidad San Francisco de Quito and Parque Nacional Galapagos (Ecuador), Fundacion Malpelo (Colombia), PRETOMA and Misi.n Tibur.n (Costa Rica), Pelagios-Kakunj. (Mexico), Smithsonian Tropical Research Institute (Panama), and the Leatherback Trust and University of California, Davis (United States of America). This network of scientists, conservationists and researchers shares data and information that allows for quick findings to be made.

For instance, Turtle Island tagged a green sea turtle named ‘Sanjay,’ and tracked him swimming from Cocos Island National Park in Costa Rica to the Gal.pagos Islands in Ecuador. Other scientists in the Migramar Network have seen the connectivity between the islands here as evidenced by tagged sharks swimming between them.

In total the Migramar Network has tagged over a thousand migratory animals like sharks and sea turtles. The data shows that these species migrate between and use multiple Islands. Sadly, these species face threats when they leave protect zones on their migrations from longlining vessels and overfishing. Turtle Island is working to create the world’s first Marine Protected Swimway that would use science-based evidence to protect the animals during there migrations, not just on their Island stopovers.

Underwater photos from Cocos Island, Costa Rica are available for media use.