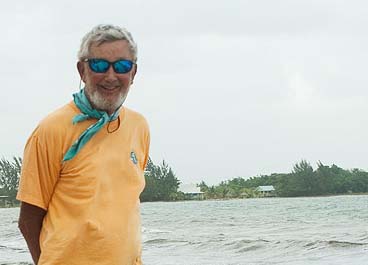 By Turtle Island Restoration NetworkMay 13, 2016Resources for the Media, Sea Turtles
No Comments

It is with a heavy heart that I report that Jack Woody, one of the original Board members of Turtle Island passed April 28, 2016.  He was 83.

Woody was one of my most important and encouraging sea turtle mentors in the earliest days of the founding of the Sea Turtle Restoration Project.  He supported my earliest work in Nicaragua, and we worked together to close the notorious slaughterhouse in Mexico and convince Mexico to close the slaughterhouse and outlaw turtle hunting in that country.  When we sued the National Marine Fisheries Service (NMFS) over the large number of sea turtle strandings, Woody traveled to federal court in Texas to testify as our expert witness.

Woody’s name is synonymous with saving the Kemp’s ridley sea turtle from extinction.

Woody retired from the U.S. Fish & Wildlife Service (USFWS) as Assistant Southwest Regional Director and also directed (and probably founded) the UFWS Sea Turtle Recovery Program.  He created the U.S.-Mexico joint efforts to protect and recover the Kemp’s ridley sea turtle recovery establishing a nesting site at Padre Island National Seashore and the Kemp’s Headstarting program.  He also led the effort to close the headstarting program, when he no longer believed it was needed, to the consternation of some sea turtle conservationists and government bureaucrats alike.

Woody was someone who always did the right thing for the wildlife he was entrusted to protect, cutting through, or if necessary, ignoring the red tape that often results in inaction by others in similar positions.

I once heard Woody give a keynote address at the international sea turtle symposium in a room holding over 500 people where he admonished the crowd not to assume that his employer, the USFWS, would necessarily take the right action.

Though I probably don’t remember his exact quote, it was something like this:

‘Don’t assume the USFWS will do the right thing.  Always be looking over its shoulder, ask questions, demand answers, and if necessary, sue the agency if that is what it takes to get proper action.’

Earl Possardt  of USFWS and Barbara Schroeder of NMFS,  reported his passing with these words on C-Turtle listserve:

“It with deep sadness that we write to let you know that Jack Woody, Sea Turtle Conservation Hero and retired National Sea Turtle Coordinator for the U.S. Fish & Wildlife Service passed on to the eternal nesting beaches on the morning of 28 April.  He was a mentor, dear friend, and inspiration to many of us in the sea turtle community.   Among his many accolades was the ISTS Lifetime Achievement Award given in 2013, among his many achievements was his key role in saving Kemp’s ridley from extinction.  Well after his retirement from USFWS he encouraged and advised his sea turtle colleagues still on the front lines while cheering our victories.  We will miss his humor, authenticity, goodness, and the unique determined spirit that conveyed confidence in the face of bureaucracy and other such impediments to sea turtle conservation.  Woody asked there be no funeral or memorial services and only that he be buried next to his wife Kathy in Kansas.

Happy horizons dear Woody… you will surely be in the eternal light.”

Our heartfelt condolences go out to his family and friends.

Please take a moment to learn more about Woody by clicking here: http://www.seaturtle.org/mtn/archives/mtn62/mtn62p1.shtml