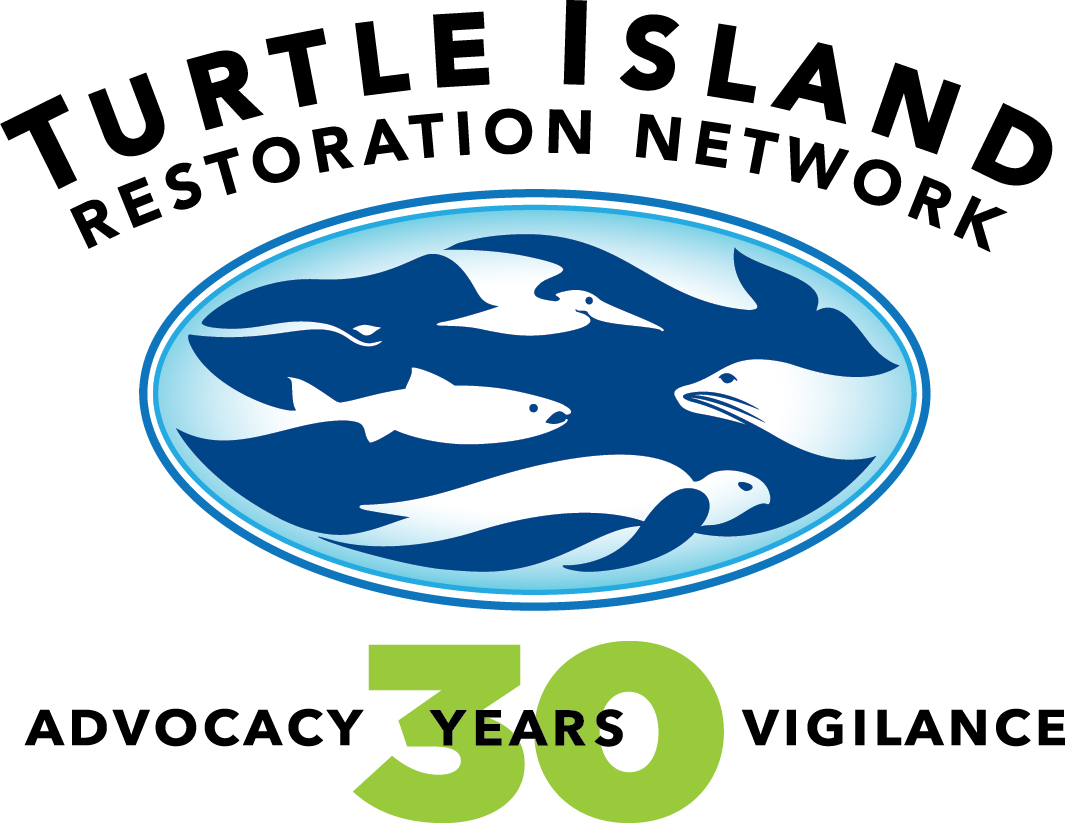 This keynote was originally presented by Turtle Island Restoration Network Founder & Executive Director Todd Steiner at the EACH Foundation Social Impact Summer Soiree! on July 25 in San Francisco. A transcript of the speech is included below.

Hello, my name is Todd Steiner and I’m the executive director of Turtle Island Restoration Network. For thirty years, Turtle Island Restoration Network (TIRN) has been an effective catalyst for cutting edge environmental protection. Our efforts have focused on endangered marine wildlife, and our campaigns—with the help of thousands of volunteers like you—have helped to protect sea turtles, sharks, whales, and salmon around the world.

It’s been an extraordinary journey—tracing the routes of highly migratory species to identify threats and crystallizing novel solutions to prevent their extinction.

We began 30 years ago tagging sea turtles in Nicaragua—only to find they were being slaughtered in Mexico.

With my infant son on my back, we exposed a notorious slaughterhouse responsible for the deaths of 50,000 turtles a year, collecting the under-cover footage that launched our first international campaign. We successfully ended what was at that time the largest killing of an endangered species anywhere in the world.

Today TIRN is headquartered in Marin County on National Park Service lands. But the amazing adventure to protect endangered marine life takes our staff around the world to create coalitions, recruit staff and volunteers and establish offices from Texas to Costa Rica to Papua New Guinea.

At Turtle Island, we think—and act—both locally and globally.

One of the under-water places on our blue planet that inspires me the most is Cocos Island, a remote National Park located 350 miles off the Pacific Coast of Costa Rica, most famous for its giant schools of hammerhead sharks.

When I first dove beneath the surface here, I got the feeling I was looking back in time hundreds of years, to an earlier era before we overfished and wiped out the vast populations of marine wild-life and giant predators of the sea. This was a place worth protecting.

At Cocos we working now by tagging migratory turtles and sharks with satellite telemetry—including hammerheads and tiger sharks—to learn how to best protect these endangered species–including when they leave the safety of this reserve on their long high-seas migrations. Our Cocos expeditions are accomplished with the help of citizen scientists, so if you are a scuba diver, talk to me about joining one of our upcoming expeditions.

Our data has now shown that at least five different endangered shark and turtle species migrate along an underwater mountain range that connects Costa Rica’s Cocos Island and Ecuador’s Galapagos Islands. Based on our research, we are successfully advocating to establish an underwater superhighway for marine species—to create the first marine protected area that will connect the national parks of two different nations. I am happy to report this unique concept is gaining momentum, and negotiations are now underway between the governments of Ecuador and Costa Rica.

This footage was taken just a few hundred yards from our headquarters, located just 30 miles from San Francisco, and I invite you to bring your kids and join me this winter to watch these amazing species as they migrate upstream to spawn.

To allow these magnificent fish to recover and survive, we have embarked on projects to protect and restore their habitat through our program called SPAWN. This photo was taken this spring, next to our offices on Sir Francis Drake Boulevard, shortly after we ‘rewild-ed’ the land where the ghost towns of Jewell and Tocaloma once stood. This was achieved by bringing together the National Park Service, California Fish & Wildlife, the Water Board, Coastal Commission, private supporters and many others to re-imagine our future.

Ultimately, we accomplished the mission by removing abandoned structures, hauling away 11,000 cubic yards of soil along Lagunitas Creek—dumped there decades ago during the construction of Sir Francis Drake Boulevard—and re-creating the destroyed historical floodplains that salmon need to survive and recover.

With hundreds of students, volunteers, and recent college graduates who are part of our residential internship program, we have already planted 10,000 native plants—all from seeds collected and grown by our volunteers.

Our restoration work spawned our 10,000 Redwoods project, a grassroots movement to plant thousands of giant redwoods to sequester carbon and fight climate disruption.

We are now working to acquire additional creekside parcels to protect and restore salmon habitat, and we are looking for more local investors to secure a sustainable future for endangered species here in the Bay Area.

I’ll end with one of my favorite quotes from anthropologist Margaret Mead, “Never doubt that a small group of thoughtful, committed citizens can change the world; indeed, it’s the only thing that ever has.”

So, I invite you to join us and leave this planet a healthier and better place for current and future generations. I look forward to chatting with you more, and I hope in the near future, we stand together under a giant redwood tree or embark on a journey at sea, to plot how we can work together to protect our Mother Earth.

Thank you for your interest and attention.