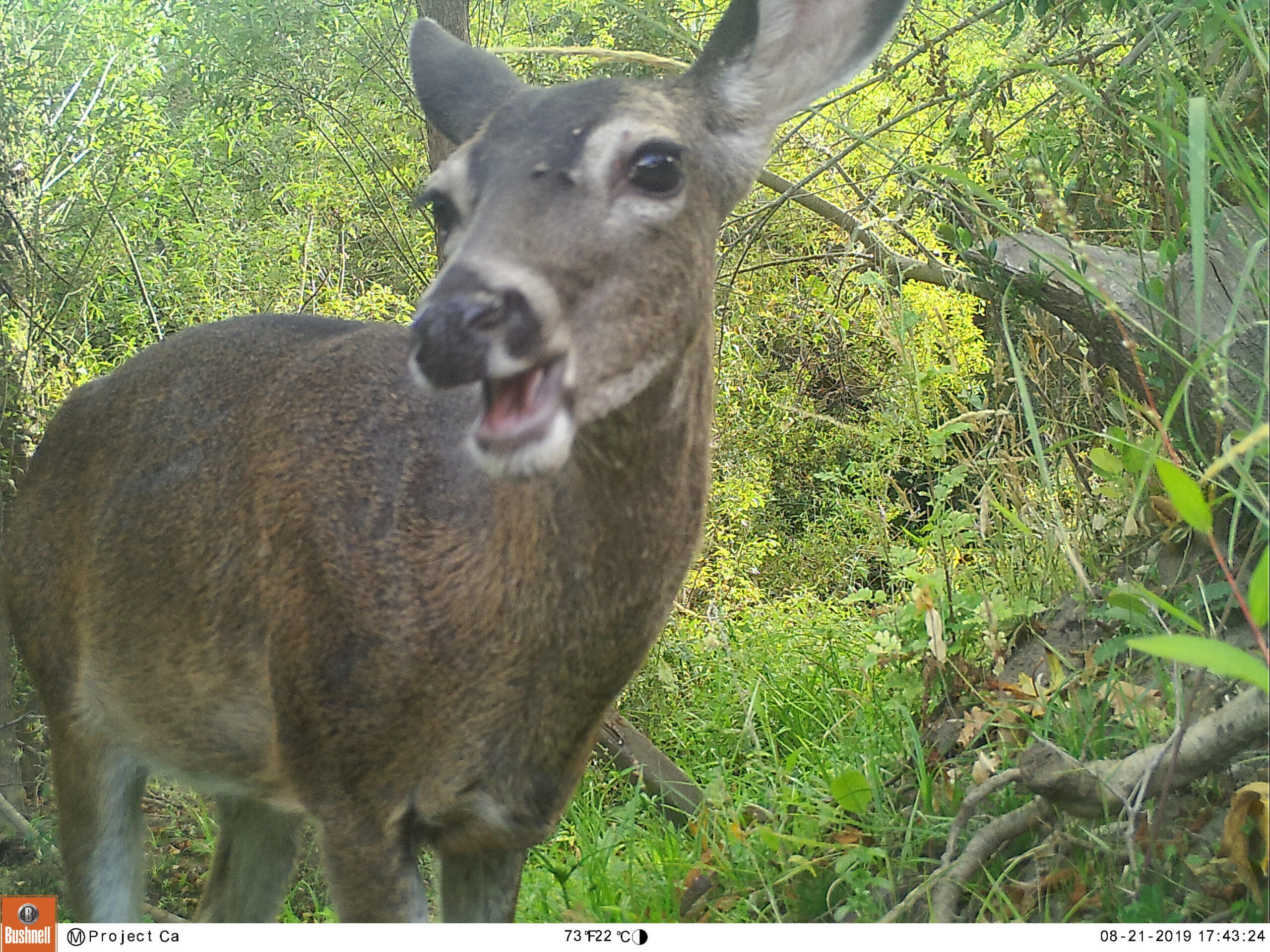 Out here in Olema, we’re lucky to have an abundance of wildlife surrounding us. With some well-placed camera traps, we can see how these animals behave and interact with one another away from a human presence. These traps, or trail cams, allow us to collect passive data in a way that does not affect the behavior of the wildlife. We can then draw valuable insights from this data to inform our management practices and work towards a more harmonious relationship with the natural world.

Our trail cameras are placed in a variety of habitats, but we deliberately target three classifications: riparian floodplain, ephemeral stream bed, and oak woodland. One of our camera traps was recently placed in a redwood forest, but its still early days yet for the data collection, so we’ll focus on the previous three environments.

By far the most abundant animal we have around our office is black-tailed deer. These cheeky herbivores are frequently captured traveling in small herds or mother-fawn pairs by our cameras. With so many sightings, we can safely conclude which of the three habitats these deer prefer.

As the chart shows, deer have a very strong habitat preference for riparian floodplains. Riparian environments often have tender greens that deer might enjoy munching, an abundance of cover to shelter the deer from predators, and easy access to freshwater drinking areas. Oak woodlands would also provide plants to eat, but tend to be more open than riparian areas and don’t have as dense vegetation cover. Through the same lens, ephemeral stream habitat is very open and provides little green vegetation or cover from predators, so it is not surprising that deer spend the least amount of time there.

Speaking of predators, the other most frequently seen animals are coyotes, grey foxes, and bobcats! These predators were seen with much less frequency than the deer, but we can still clearly see patterns in their habitat preferences.

Coyotes exhibit a strong preference for the shady, open, oak woodland. Although they were uncommon in the other two habitat types, coyotes still needed to pass through these environments to make their predatory rounds. They might prefer the oak woodland because it allows them to see for some distance through the minimal undergrowth to effectively hunt for their prey. Despite ephemeral stream habitat being open and lots of visibility, coyotes did not spend a lot of time in this environment. We suspect that the minuscule amount of time coyotes spend in these areas is directly related to the lack of large prey.

The grey fox, unlike the coyote or deer, shows a strong preference for the ephemeral creekbed habitat. Given that a fox’s diet is primarily rodents and small birds, this makes sense. Unlike some of the bigger herbivores that avoid this more open habitat, the tall grass surrounding the dry creekbed provides ideal cover for field mice and quail. It also provides cover for the small grey fox, which is occasionally preyed upon by coyote. The ephemeral stream provides the ideal habitat for this little predator both because of access to its preferred food source and because its main predator spends little time there.

Finally, our last big mammal is one of the most elusive of them all. The bobcat is a small wild cat species most well-known for its spots and bobbed tail. A solitary creature, bobcats hunt mostly small mammals, but do hunt big prey like deer when the opportunity arises.

This varied diet is reflected in where bobcats choose to spend time. Unlike the rest of the big mammals, bobcats do not show a clear preference for a single habitat type, but instead seem to split their time between riparian floodplain and oak woodland. They are also seen in ephemeral streams, but don’t seem to spend much time there.

It is important to keep in mind that we are not seeing the whole picture. Our trail cameras are placed at only a few discrete points. There could be a lot more going on where the camera can’t record it. Keeping that in mind, however, we still see very strong patterns of habitat use. As with most science experiments, repetition is key! The more data we collect, the more accurate conclusions we can draw. Stay tuned for more insights provided by our ongoing wildlife monitoring project!